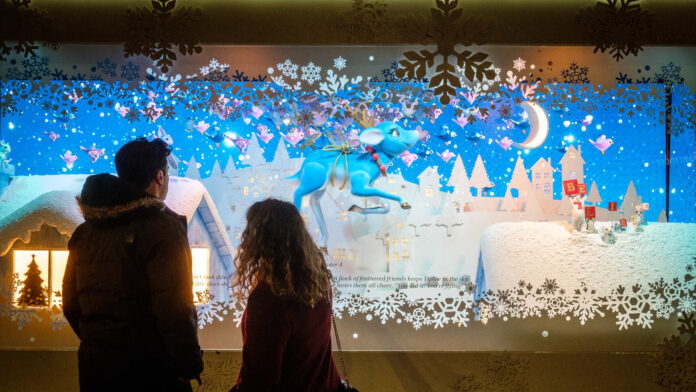 Americans are not planning major cuts in holiday spending this year, starting with Black Friday, despite inflation fears and the risk of recession being top concerns among the majority of consumers, according to an annual survey conducted by CNBC and SurveyMonkey ahead of the first big shopping weekend of peak season.

Two-thirds of Americans (67%) are worried about inflation making it more difficult for them to buy the items they want. Even more (69%) worry a recession will limit their ability to make purchases. But anticipated cutbacks in spending among consumers are only up slightly compared to last year — 39% versus 36% — with the majority of Americans saying they expect to spend the same (44%) or more (14%) this year, according to the annual CNBC|SurveyMonkey Small Business Saturday poll.

“People are pretty consistent on how much they expect to spend on holiday shopping,” said Laura Wronski, senior manager of research science at Momentive. “Things are going to cost more and you have to accept that there is not some secret way to get around that high inflation,” she said. But she cautioned that there’s still the risk that consumer behavior changes once shoppers evaluate prices. “The intent may be different than the outcome. They will see some sticker shock out there and find their budget won’t go as far as previous years,” Wronski said.

The survey results reveal the consumer divide in the economy, with spending concerns more prevalent at lower income levels.

Seventy-eight percent of households earning less than $50,000 are concerned about their spending power amid inflation this holiday season, a figure which drops to 56% for household incomes of $100,000 or more.

Economic concerns are relatively high among younger Americans as well, with 73% of those 18-34 worried about being able to buy what they want due to inflation, the highest among any age group in the survey.

The data on inflation matches concerns in last year’s survey regarding a supply chain which at that time was broken.

“Inflation is playing that role of the supply chain saga this year,” Wronski said.

The SurveyMonkey online poll was conducted November 9-13, 2022 among a national sample of 3,549 adults.

But the concerns about younger consumers have also been displayed in recent retail sales reports. Urban Outfitters CEO Richard Hayne said on its earnings call earlier this week that the company raised prices “more than we should have” at its stores — it has a younger consumer base that is more impacted by inflation. American Eagle Outfitters’ CEO said on its earnings call to expect, “a highly promotional holiday season.”

Retailers are expected to offer some pretty big discounts to move inventory, starting with Black Friday.

“Both inflation and recession are tied together and both top of mind for consumers, but habits are sticky,” Wronski said. “This is the time of year you are expected to make purchases and spend more than you should. … That’s the main takeaway. They aren’t making big changes despite the fact that they have recession concerns and we are in a high inflation environment.”

The CNBC|SurveyMonkey poll finds that with many consumer spending habits in line with the past, sharp changes in shopping patterns caused by the pandemic, such as e-commerce versus in-store, are settling into a new normal.

Here are a few more of the key findings from this year’s survey.

Black Friday is still the No. 1 shopping holiday

The survey has consistently found that the hype around shopping holidays is often higher than the actual excitement among consumers. More than half (55%) of survey respondents don’t plan to go shopping on Black Friday, Small Business Saturday or Cyber Monday. Last year, that figure was at 52%.

But Black Friday remains the No. 1 shopping holiday that Americans say they will spend on. One in five (21%) are “most excited” to go shopping on Black Friday, almost double the consumers planning to shop on Cyber Monday (12%). Small Business Saturday is a distant third, at 7%.

For small businesses, the concept of a holiday shopping day is more difficult to convey as there are so many different kinds of businesses that fit under the Main Street umbrella, Wronski noted, from the local bookstore to restaurants and many other types of retail, and there is also less coordination of discounts possible compared to the likes of big box retailers.

There has been a steep decline over the past four years in holiday shoppers who plan to patronize a small business on Small Business Saturday, down from 44% in 2018 to 28% this year.

The gains made by e-commerce may have contributed to a permanent decline in Small Business Saturday shopping interest, which is at a four-year low. But it’s also contributed to more small business purchases being made online, with the percentage of Americans planning to buy online from a small business this year doubling over the past four years, from 9% to 18%, while those who say they will patronize a small business in-person has fallen by 10% (from 58% vs. 48%). During the peak pandemic year of 2020, one-fifth (20%) of consumers planning to spend on Small Business Saturday said they would make purchases online, with this year’s results indicating permanent gains for Main Street e-commerce.

A correlation between the Amazon threat and Main Street’s struggles, meanwhile, is not in evidence in the survey results. Two-thirds of American adults (66%) say they have Amazon Prime subscriptions, virtually unchanged from last year, but they are much more likely to say they will spend on Small Business Saturday (33%). That’s nearly double the number of consumers who don’t subscribe to Amazon Prime (18%) and plan to shop on Small Business Saturday.

“We always hear about the Amazon threat but we never seen it play out that way,” Wronski said. “It shows up in some data in other ways, and Amazon is taking business away, but at same time people buying from Amazon are also buying from small businesses at higher rates,” she said, adding that one factor is a correlation between an Amazon Prime subscription and higher wealth levels.

E-commerce gains have slowed but are here to stay

This year has been a tough one for technology companies that bet the acceleration of gains made during the pandemic would continue with the behavior of Americans vastly changed. That’s not the case, but gains made by e-commerce do look to be settling into a permanent state.

How to get the most out of your gift

Okta, Nutanix, Five Below and more