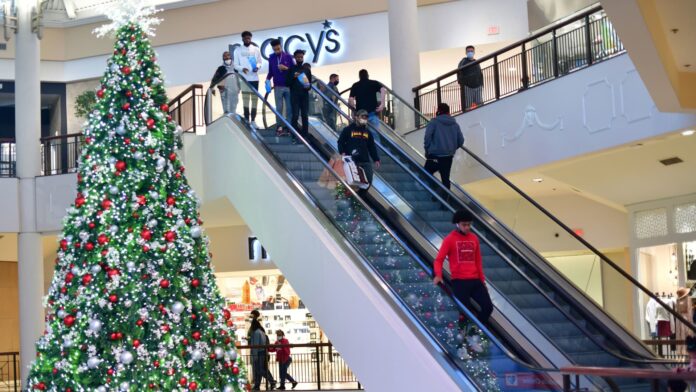 Getting shoppers to spend this holiday season won’t be easy.

The National Retail Federation said Thursday that it expects holiday sales during November and December to rise between 6% and 8% from last year — a decline when factoring in the effect of inflation. The sales forecast excludes spending at automobile dealers, gasoline stations and restaurants.

As of September, inflation is up 8.2% from a year ago, according to the Bureau of Labor Statistics’ consumer price index. That is a near four-decade high. The NRF, for its part, pointed to the personal consumption expenditures price index, which has increased 5.1% from a year ago, as a more apt comparison.

The trade group’s outlook indicates a more challenging holiday ahead for retailers. A year ago, consumers shopped early and spent more to secure gifts as stores struggled to keep shelves stocked amid shipping delays. This year, however, major retailers including Walmart and Nike are swimming in extra inventory. Consumers are splurging less on items like clothing and electronics as they pay more for groceries and services like dining out and travel.

NRF Chief Executive Matt Shay said on a call that Americans are still eager to spend this holiday season, but have become more cautious about their purchases as grocery and energy bills rise. In some cases, he said, they are dipping into savings accounts and turning to their credit cards as a way to cushion spending.

“Some of that is going to impact their gift giving and how they cover their other expenses during the holiday season,” he said.

There are still factors working in retailers’ favor, said Jack Kleinhenz, chief economist for the National Retail Federation. Consumers built up savings during the pandemic and the labor market is strong, which may make them feel secure enough to keep spending.

Travel is taking up more of people’s budget, but he said they will likely bring food or presents when they take those trips – and may spring for new outfits, too.

Consumers plan to spend an average of $832.84 on gifts and holiday items such as decorations and food, according to NRF. That’s roughly in line with the last 10 years, but the amount may buy fewer goods because of inflation.

Other industry-watchers have also forecast a muted holiday season. For instance, consulting firm Bain & Co. is predicting growth of as much as 7.5% from last year, or just 1% to 3% when factoring in inflation. AlixPartners is projecting a 4% to 7% increase, which represents a drop when accounting for inflation.

The outlook comes after the pandemic fueled two years of exceptional demand during the key holiday shopping season. In 2020, holiday sales rose 8.2% from the previous year to $777.3 billion, according to the NRF, as consumers cheered themselves up with gift-giving during the pandemic. Last year, holiday sales jumped 14.1% and hit a record of $886.7 billion.

This year’s projected increase would put spending at between $942.6 billion and $960.4 billion.

That growth compares with an average 4.4% increase in holiday sales over the previous five years.

The battle over inflation-linked pay adding to European port contagion