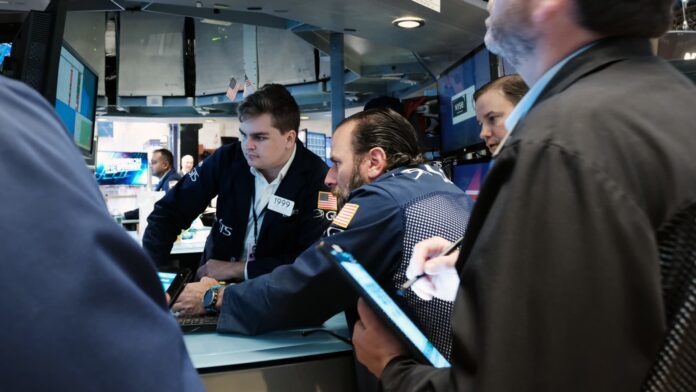 This is the daily notebook of Mike Santoli, CNBC’s senior markets commentator, with ideas about trends, stocks and market statistics. Stocks are still burning off some of that oversold energy to recover the premarket pullback as Treasury yields and oil prices sink further from their highs. Federal Reserve Chair Jerome Powell offered no fresh hawkishness on rates to Congress after last week’s resetting of the tightening path to be ” front-loaded ” with a 0.75 percentage point bump. It’s still a twitchy, stressed market, moving only briefly above yesterday’s high this morning, and it’s still under the breakdown level from last week of 3,810. But the refusal to give back yesterday’s bounce immediately is at least a baby step toward taking better advantage of the washout-like extremes following the two-week slide. The market has a tone today supporting the idea that the focal point of investor concern is migrating from acute inflation panic to the risks to growth. To “stag” from “flation,” to oversimplify. The yield on the 2-year Treasury note at 3.07% is off 35 basis points from last week’s high, implying collective skepticism that the Fed can or will get short rates much above 3%. Getting them up toward neutral alongside a hoped-for moderation of inflation is looking like the playbook. Yet the impact on U.S. growth rates from the lagged effect of tighter financial conditions and further rate hikes is now the locus of the debate. Good thing the market has already come a good distance toward reflecting such concerns, the equal-weight S & P 500 now trading around 13-times forward earnings. Of course, everyone is waving their arms and saying estimates “need” to come down. Probably so, to a degree. But a big reason that valuations are down so much is the market already suspects the forecasts are in some jeopardy. Also, high nominal inflation means top line could be OK. It’s probably too early to expect stocks to “look through” a coming rough patch for profits, but potential slowdown is not remotely news to this market at this point. Oil down is part consolidation, part growth fears, part monthly futures roll and part momentum whipsaw. Trend-following systematic trading funds are heavily long oil now. As noted a month ago, energy stocks were added to momentum-factor strategies including the iShares MSCI USA Momentum Factor ETF . There has been some give-back in energy strength since then but nothing that has yet undercut its leadership status. Be on watch for shifts, though. Other commodities have come in sharply off their highs. Investor sentiment remains flat on the mat. In a bear market, this can persist awhile and isn’t an instant contrarian buy signal. However, it does suggest the market isn’t poised for pleasant surprises, and arguably mean-reversion is becoming more a friend to longs than it was months ago. Here’s the Investors Intelligence data today, pretty much as low as it gets outside a systemic Black Swan a la 2008. There should in theory be some month-end lift for equities from quarterly rebalancing back into underperforming stocks from bonds and cash in asset-allocation portfolios. This helped drive a (fleeting) late-March bounce. This is complicated by a three-decade history of this particular week in June (post options expiration) having a negative record (down 25 of 32 years). Seems like we were “presold” last week with the 5.8% dump, but we need to be aware of the history. Market breadth Tuesday was good but not stellar. It didn’t convince the bears that it was any more than a reflex oversold bounce. One of these will stick, trigger broad buying and a bit of FOMO. We await this moment. Breadth today is mixed and noncommittal. VIX slipping under 30 as the overall index is a bit static relative to recent swings. It’s been high-ish for two months. Not a lot of urgent hedging demand. Maybe that’s because there’s already been a lot of de-risking. Some still want to see VIX above 40 to check off a box, but it’s unclear how this became everyone’s skeleton key to a real rebound. Credit improved Tuesday. It’s softer Wednesday. This is not critical (won’t yet get the Fed concerned) but still could become a raw nerve for the Street if there’s further erosion.