HomeBusinessIs it safe to cruise again? Yes, say fans who are cruising...
Business

Is it safe to cruise again? Yes, say fans who are cruising again 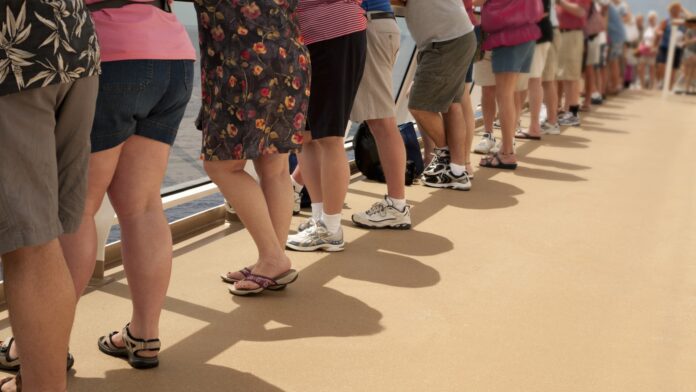 Cruise ships dominated the news in early 2020 for all the wrong reasons. Some people predicted the industry would never recover.

“Given a choice, we would be living on the cruise ship for the remainder of our lives,” said Singaporean Peter Lim.

Those troubles from 2020 are “not of any concern,” he said. “We are all vaccinated [and] take and observe personal health protocols.”

Lim said he’s “lost count” of how many cruises he and wife have been on and has already planned three cruises through 2023.

He’s likes “waking up in a different country the next day,” plus the great customer service and loyalty benefits cruises provide.

Lim said he wasn’t swayed by reports last week of a Covid-19 outbreak onboard the Coral Princess, a cruise ship that is circumnavigating Australia.

Last week, four out of 12 cruise ships monitored by New South Wales, Australia had Covid-19 cases onboard, according to the government’s website. The Coral Princess was categorized as “Tier 3” — the highest risk level — indicating that more than 10% of passengers are positive or that the vessel is unable to maintain critical services.

Pursuant to Australian regulations, passengers who test positive onboard cruise ships must self-isolate for at least five days. But that’s a far cry from being “trapped” onboard, as some media reports suggested, said Lim.

Those who weren’t infected were “allowed by local health authorities to enjoy schedules and programs,” he said.

No longer concerned about Covid

Nearly two out of three travelers say they are no longer concerned about Covid-19 on cruises, according to a survey of 4,200 customers of the travel insurance company Squaremouth.

The company said this is a “complete shift” from earlier this year, when 63% of its customers said Covid-19 was their biggest cruise-related concern. Now, respondents say they are more worried about weather and airline disruptions, according to the survey published in October.

Popular ports of call, such as the Bahamas, are dropping Covid requirements such as requiring cruise passengers be vaccinated to disembark.

The “2022 Member Survey” published by Cruiseline.com and the booking app Shipmate showed 91% of respondents planned to take a cruise by 2023.

Regular leisure travelers are also open to cruising again, according to a new report by Arrivia. The travel loyalty provider, which operates programs for American Express, Bank of America and USAA, said 75% of members indicated plans to cruise in the next two years.

The pandemic didn’t scare away new recruits either. Indian national Neel Banerjee said he had “no qualms” about cruising this month with his family on Royal Caribbean’s Spectrum of the Seas — his first cruise ever.

He said he felt safe, and that his family wore masks in crowded areas.

He may cruise again as early as next year, he said.

An ‘explosion of bookings’

When cruise lines started to drop vaccination and testing requirements in August, the industry saw “an explosion of bookings,” according to Patrick Scholes, a managing director of lodging and leisure at Truist Securities.

He told CNBC’s “Power Lunch” in September that this was especially true for luxury cruises.

Norwegian Cruise Line “has far and away the greatest exposure to luxury and super-high-end luxury … that component of consumer spending in travel is blowing away the mass market spending,” he said.

Grenada’s Tourism Authority said 202 cruises are scheduled to visit the island in the coming season, representing an 11% increase from the year before the pandemic.

When bookings opened for the Norwegian Prima, a new class of ship for Norwegian Cruise Line, it led to the “single best booking day and week in our company’s 55-year history,” Braydon Holland, Norwegian’s senior director, told CNBC.

Stefanie Schmudde, a vice president of product and operations at the luxury travel operator Abercrombie & Kent, said a rise in popularity of expedition cruising has taken travel advisors by surprise.

Luxury travel operator Abercrombie & Kent said it is on track to have a “record year” in expedition cruising.

“Expedition cruising” is a subset of cruising that involves smaller ships, remote destinations and talks with onboard specialists, such as marine biologists and astronauts, said Schmudde.

“Expedition cruising represents a higher percentage of our bookings than at any time in A&K’s 60-year history,” she said. “Not only is demand surpassing pre-pandemic levels, but in many instances, so too is average spend.”

Despite a strong showing this year, the global cruising industry won’t return to pre-pandemic levels until 2027, according to the market research provider Euromonitor International.

In 2019, the global cruising industry grossed some $67.9 billion, according to Euromonitor. This year, it’s expected to bring in slightly more than half that amount — about 38 billion — climbing 7% annually, to reach total retail sales of $67.9 billion again in five years.

Global recovery is being held back by two regions — Eastern Europe and Asia-Pacific, said Prudence Lai, senior analyst at Euromonitor.

Without elaborating, Lai cited “geopolitical tensions” that are stunting growth in Europe.

In Asia, the problem is due “mainly to the slow recovery in China … due to the strict zero-tolerance Covid policies,” she said.

China has historically made up about 80% of the Asia-Pacific’s cruise market, said Lai. But “currently we only are seeing around 55% of pre-Covid levels driven by [the] domestic sector especially in regions [near the] Southern China Sea and Yangtze River,” she said.

Cruising revenues in Asia-Pacific are expected to remain stagnant this year as well as 2023, reaching about 75% of pre-pandemic levels by 2027, according to Euromonitor’s market research database Passport.