HomePoliticsJan. 6 hearing to spotlight Trump's pressure on DOJ and plan to...
Politics 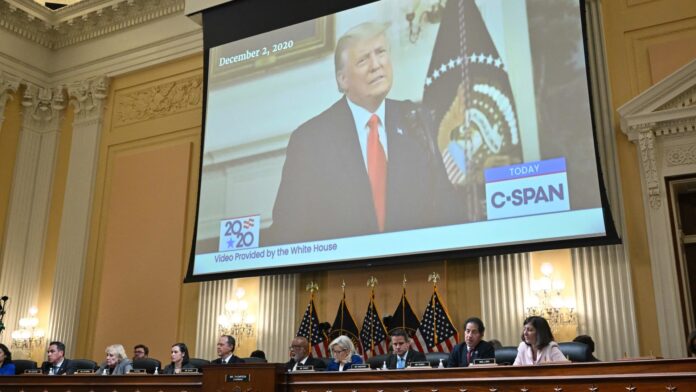 Former President Donald Trump appears on screen during the fourth hearing by the House Select Committee to Investigate the January 6th Attack on the US Capitol in the Cannon House Office Building on June 21, 2022 in Washington, DC.

The House select committee investigating the Jan. 6 Capitol riot is holding its fifth hearing Thursday where it plans to show how President Donald Trump clashed with top Department of Justice leaders who pushed back on his efforts to overturn the 2020 election.

The event marks the committee’s fifth presentation of evidence from its nearly yearlong investigation of Jan. 6, 2021, when a violent pro-Trump mob stormed the U.S. Capitol. The rioters, spurred by Trump’s false claims of rampant electoral fraud, temporarily prevented Congress from confirming Biden’s victory.

The committee argues that its initial findings show Trump was at the center of a multi-pronged conspiracy to overthrow the legitimate results of the 2020 presidential election. The panel notes that its investigation is ongoing.

[The livestream is slated to begin at 3 p.m. ET. Please refresh the page if you do not see a player at that time.]

What the inverted yield curve means for your portfolio

Delta gets closer to labor deal with pilots, union says