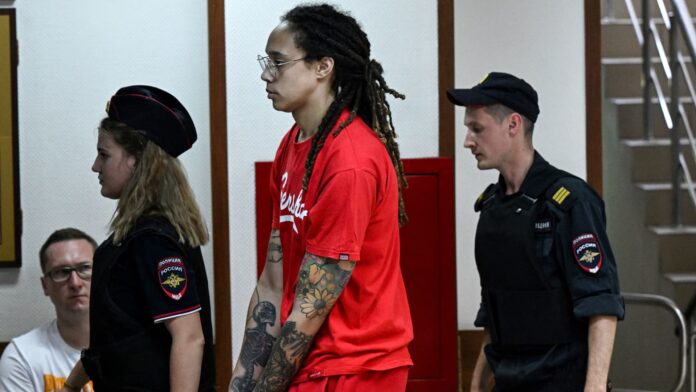 US WNBA basketball superstar Brittney Griner arrives to a hearing at the Khimki Court, outside Moscow on July 7, 2022.

WASHINGTON – President Joe Biden will sign an executive order that will expand the administration’s available tools to deter hostage-taking and the wrongful detention of U.S. nationals.

The executive order, known as “Bolstering Efforts to Bring Hostages and Wrongfully Detained United States Nationals Home,” will authorize the imposition of financial sanctions and visa bans on people involved in hostage-taking.

“This executive order reflects the administration’s commitment not just to the issues generally but to the families in particular and it has been informed by the government’s regular engagements with them,” said a senior Biden administration official, who spoke on condition of anonymity in order to share details about the new executive order.

“The president has been willing to make what he himself has said publicly are tough, but important calls when it means bringing home Americans,” the senior administration official said.

The official also said the State Department will introduce a new risk indicator, the letter “D,” on travel advisories to inform Americans of the risk of wrongful detention by a foreign government. The “D” indicator joins the existing “K” indicator that identifies the risk of kidnapping.

The executive order comes as the Biden administration works for the release of WNBA star Brittney Griner from a Russian prison. The 31-year-old Griner, who plays professional basketball in Russia during the WNBA offseason, was arrested in February at a Russian airport on accusations that she was smuggling hashish oil.

The Biden administration has described Griner’s arrest, a dramatic revelation that came as the Kremlin prepared for war in Ukraine, as wrongful detention. Earlier this month, she pleaded guilty to drug charges in a Moscow court and faces up to 10 years in prison if convicted.

“I’m terrified I might be here forever,” the Olympian wrote in a letter to Biden, asking for his direct assistance with her case.

On the heels of the letter, Biden and Vice President Kamala Harris spoke with her wife Cherelle Griner.

Biden reassured her wife that he is working to secure Griner’s release as soon as possible, according to a White House readout of the call. He also said on the call that he is working on the release of Paul Whelan, a former U.S. Marine who is serving a 16-year sentence in Russia.

In April, Russia agreed to release former U.S. Marine Trevor Reed in a prisoner exchange with the United States.

Reed was accused of assaulting a Russian officer and detained by authorities there in 2019. He was later sentenced to nine years in a Russian prison. Reed and his family have maintained his innocence and the U.S. government described him as unjustly imprisoned.

Consumers expect inflation to slow down, a big win for the Fed

Companies forced to weigh in on privacy, health care