HomeInvestingJPMorgan, Bank of America and Citi may need to cut buybacks after...
Investing

JPMorgan, Bank of America and Citi may need to cut buybacks after stress test 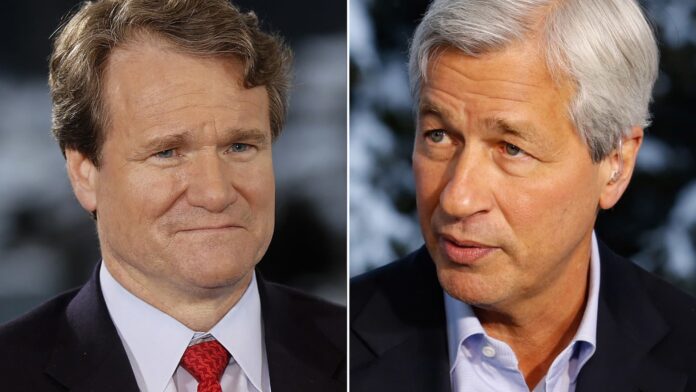 The biggest American banks may have to hit the brakes on capital return to shareholders because of regulators’ annual stress test, according to Morgan Stanley analysts led by Betsy Graseck. Analyst reaction to the Federal Reserve stress test results released late Thursday focused on an unexpected increase in the stress capital buffers of banks including JPMorgan Chase , Bank of America and Citigroup . The measure, tied to the capital expended in a hypothetical stress scenario of plunging U.S. employment and stock prices, essentially shows the minimum capital levels required for each individual bank in the Federal Reserve’s annual exercise. The three biggest U.S. banks by assets may have to preserve capital and adjust trading activities as a result of their buffers rising more than expected, analysts said. “Relative to our prior estimates, the new Stress Capital Buffers suggest that BAC, Citi and JPM will need to keep dividends flat, eliminate buybacks and cut” trading-related assets to stay comfortably above the new required capital levels, Graseck said in a note released early Friday. To be clear, all 34 of the banks involved in the 2022 stress test passed the exercise , which showed that the industry would be able to handle a “severely adverse scenario” that includes U.S. unemployment rising to 10%. While the annual exams have been getting progressively more difficult, the analyst community had expected banks to pass; at play was how much capital they could return to shareholders in the form of buybacks and dividend increases. Several analysts focused on the larger-than-expected increase in stress capital buffers at some of the biggest banks. At Bank of America and Citigroup, lower companywide revenue under the hypothetical scenario results in lower-than-expected capital levels, Deutsche Bank analysts led by Matt O’Connor said Friday. For JPMorgan, a combination of lower revenue and higher credit costs resulted in capital that was 10 basis points below minimum levels, O’Connor wrote. The stress capital buffers at Bank of America and Citigroup each jumped approximately 100 basis points from a year ago, “which will increase their capital requirements and targets, and in turn impact share buybacks,” noted JPMorgan analyst Vivek Juneja. Veteran banking analyst Mike Mayo also said Thursday in a note that the capital requirement increases at Citigroup, Bank of America and JPMorgan will lead to “much fewer buybacks at these three banks” for the rest of 2022. As a result, the U.S. banking industry is likely to pull back on buybacks at a time when investors may want them to be ramped up because their stock prices are low. Shares of JPMorgan hit a 52-week low of $111.48 on Thursday. The major banks are down more than 20% so far this year, and all are trading at the low-end of their 52-week ranges. “Results today confirm what we already knew … that share buybacks at most banks will be less in the near term than they’ve been,” O’Connor wrote. The change “reflects a combination of increased macro uncertainty, strong loan growth (which consumes capital), the impact of higher rates on capital (for some banks), and the impact of deals (for some banks).” While results for the biggest lenders disappointed, Goldman Sachs may have more flexibility because of its results. The bank was the only one under O’Connor’s coverage whose capital buffer decreased from last year’s stress test, he wrote. That will give it the ability to “help support growth, additional bolt on deals, and buybacks” for New York-based Goldman, he wrote. Banks are expected to begin releasing their capital plans after the market close on Monday. Only then will investors know the size of buyback plans and whether dividends will be increased. Before the stress test results were released, JPMorgan was expected to return a combined $18.9 billion in dividends and share repurchases, and Bank of America was expected to release $15.5 billion, according to Barclays analysts.