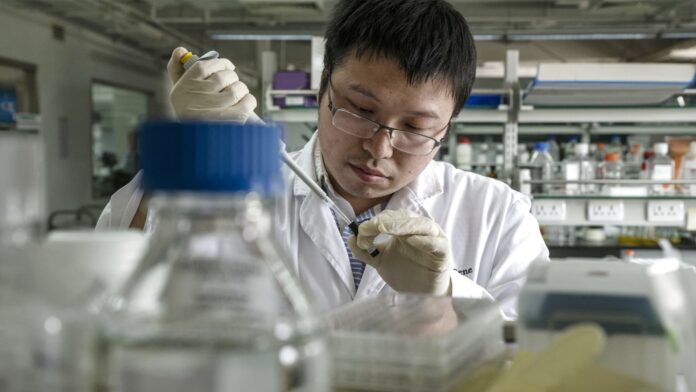 Investors should consider putting their money in this undervalued China-based biopharmaceutical stock poised to rally more than 40%, JPMorgan Chase says. Analyst Xiling Chen initiated coverage of BeiGene with an overweight rating, saying in a note to clients Monday that the company’s products should drive strong growth ahead. “We see BeiGene shares as undervalued given quality of assets/growth and highlight the stock as among our top picks in the sector,” he wrote. Chen placed a $296 price target on the stock, which suggests that shares could rally another 46% from Monday’s close. The shares are listed in the U.S. as an ADR. In particular, Chen believes that the company’s three internally-developed drugs are well-positioned to continue to gain share in their respective markets and that BeiGene offers one of the most diverse portfolios compared to its Chinese biopharma peers. At the same time, the company is among one of the only Chinese developers with products approved in the U.S., giving it another leg up over some of its competitors. “We see BeiGene offering best-in-class clinical development and partnership skills,” Chen wrote. “BeiGene has built robust clinical development and business development capabilities unmatched by most Chinese competitors, in our view.” Shares of BeiGene have fallen more than 25% this year. — CNBC’s Michael Bloom contributed reporting

Ivermectin — once touted as a Covid treatment by conservatives — doesn’t improve recovery much, clinical trial finds