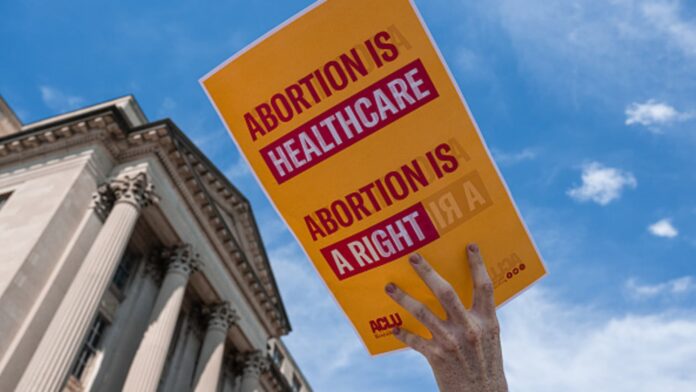 An abortion rights protester displays a sign outside during a gathering outside of The Gene Snyder U.S. Courthouse in response to the U.S. Supreme Courts conservative majority decision to overturn Roe v. Wade and ending constitutional protections for abortion on June 24, 2022 in Louisville, United States.

A judge in Kentucky temporarily blocked that state’s near-total ban on abortions Thursday, clearing the way for the procedure to resume there, while a judge in Florida said he would block a 15-week abortion ban from taking effect in that state.

The ruling in Kentucky pauses that state’s so-called trigger law, which was designed to take effect after the nation’s highest court ruled to end federal constitutional protections for abortions. The case reflects battles being waged in courts across the country after the Supreme Court left it up to the states to decide whether abortion is legal within their borders — forcing abortion rights groups to turn to state constitutions for protection.

In Florida, Judge John C. Cooper said he would temporarily block a 15-week abortion ban from taking effect after a court challenge by reproductive health providers who say the state constitution guarantees a right to the procedure. Cooper said Florida’s ban was “unconstitutional in that it violates the privacy provision of the Florida Constitution.”

Some of the state disputes involve bans that have been on the books, unenforced, for generations. Some involve trigger laws like Kentucky’s that were specifically designed to take effect if Roe were to fall. Some entail prohibitions on abortion that were held up pending the ruling on Roe and are now moving forward.

The flurry of court activity has caused confusion in states, and left patients and clinics scrambling.

In Arizona, the attorney general said Wednesday that a total abortion ban that has been on the books since before statehood can be enforced, though the governor disagrees and has said a new law that bans abortion after 15 weeks takes precedence. Abortion providers in that state immediately stopped performing the procedure out of fear of prosecution.

In Louisiana, that attorney general warned doctors against performing abortions, even while a ban there is temporarily blocked.

In Kentucky, Thursday’s ruling allowed abortions to resume after they ended abruptly last week. Heather Gatnarek, an attorney for the American Civil Liberties Union of Kentucky, said nearly 200 women with scheduled appointments have been turned away from EMW Women’s Surgical Center, one of the two Louisville abortion clinics, in recent days.

The ACLU and Planned Parenthood released a joint statement saying they were glad the “cruel abortion bans” were blocked, adding that since last week’s ruling, “numerous Kentuckians have been forced to carry pregnancies against their will or flee their home state in search of essential care. Despite this victory, we know this fight is far from over.”

Kentucky Attorney General Daniel Cameron, a Republican running for governor, said Thursday’s ruling had no basis in the state constitution and he intends to challenge it.

“We will do everything possible to continue defending this law and to ensure that unborn life is protected in the Commonwealth,” he said in a statement.

The ruling comes in a lawsuit filed this week on behalf of abortion clinics, which said women were being “forced to remain pregnant against their will” in violation of the state’s constitution. They had asked the judge to temporarily block the trigger law along with another Kentucky law that attempted to prevent abortions at six weeks of pregnancy.

Kentucky’s trigger measure contains a narrow exception allowing a physician to perform a procedure necessary to prevent the death or permanent injury of a pregnant woman. It does not permit abortions in cases of rape or incest.

The request to continue abortion services in Kentucky — through intervention by state courts — could turn into a stopgap effort. Kentuckians will vote in November on a ballot initiative that, if ratified, would establish that no state constitutional right to abortion exists. Both sides of the abortion debate are busy organizing ahead of the election.

Goldman says buy the pullback in oil and other commodities