HomeUSAKansans vote to uphold abortion rights in their state
USA

Kansans vote to uphold abortion rights in their state 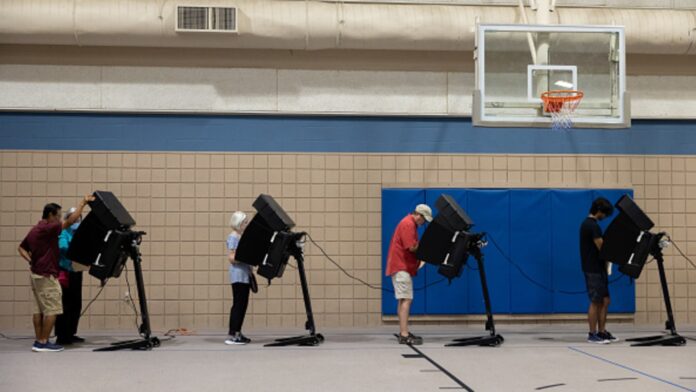 Voters cast their ballots at the Covenant Presbyterian Church in Wichita, Kansas on Aug. 2, 2022 as voters decide on a constitutional amendment regarding abortion in their state.

Kansas voters on Tuesday overwhelmingly struck down a proposed constitutional amendment that would remove language enshrining reproductive rights in their state, in a move widely seen as a victory for abortion rights activists.

The proposed amendment was the first time anywhere in the U.S. that voters cast ballots on abortion since the Supreme Court overturned Roe v. Wade in June.

A ballot question, known as the “Value Them Both Amendment,” asked voters to decide whether the state’s Constitution should continue to protect abortion rights. The proposed amendment to the state Constitution would have removed language that guarantees reproductive rights and asked voters if they prefer to put the issue of abortion in the hands of the state’s Republican-controlled legislature — an outcome that abortion advocates said was all but certain to result in the elimination or curtailment of those rights.

Anti-abortion activists had argued the Kansas ballot question created an opportunity to put the issue in the hands of the voters via elected state lawmakers. Supporters of abortion rights warned that approval of the ballot measure would almost certainly result in the elimination or curtailment of existing rights in a state that has more lenient laws on its books compared to many of its neighbors.

The ballot question had been planned for more than a year, but it took on greater significance in the weeks since the Supreme Court overturned Roe v. Wade in June, ending the federal constitutional right to an abortion.

Early voting in the state kicked off in mid-July, and Schwab’s office reported that, as of last Tuesday — more than twice as many people had already cast early ballots than at the same point during the last midterm primary election in 2018. Groups on both sides of the issue blanketed Kansas airwaves with millions of dollars in ads.

The measure sought to supersede a 2019 ruling by the Kansas Supreme Court that said the state’s Constitution guaranteed the right to have an abortion. Doing so would allow the state legislature to pass laws restricting or banning abortion.

Abortion rights advocates also claimed there were several factors working against them, including the phrasing of the ballot question and the timing of its placement.

For one, they have expressed concern the ballot measure featured language they argued was intentionally designed to confuse voters. For example, the language used on the ballot said that a “yes” vote on the question would affirm that “the constitution of the state of Kansas does not require government funding of abortion” — even though no such requirement exists — “and does not create or secure a right to abortion.” A “yes” vote would have affirmed that “the people, through their elected state representatives and state senators, may pass laws regarding abortion,” something lawmakers are limited in doing now based on the 2019 court ruling.

Abortion rights advocates supported a “no” vote on the measures, which makes no changes to the status quo.

On the eve of the vote, voters reportedly received misleading text messages telling them a “yes” vote would protect the right to an abortion, however. It’s unclear who is responsible for sending out the message.

Abortion rights advocates denounced the move. “This is yet another example of the desperate and deceitful tactics of the Value Them Both campaign, lying to the voters of Kansas,” said Ashley All, spokesperson for Kansans for Constitutional Freedom.

The Value Them Both Coalition denied it was responsible for the communication.

“Everything about how this effort was crafted was done so in a way that obscures that end goal,” Ashley All, a spokeswoman for Kansas for Constitutional Freedom, a pro-abortion rights group that has been helping to lead efforts to oppose the amendment, told NBC News in a recent interview.

Abortion rights proponents have argued that with Roe gone, the stakes are far too high to put the issue in the hands of state GOP lawmakers. They point to several recently proposed bills that would restrict or ban abortion — including one introduced in March — that they say would certainly be re-introduced in upcoming state legislature sessions if the Kansas ballot initiative is successful.

Conversely, abortion opponents maintain it is more democratic to have the issue decided by voters, via their representatives.

“This is not a ban on abortion,” Republican state Rep. Tory Marie Arnberger, a supporter of the initiative who helped get it on the August ballot, told NBC News in a recent interview. “I am a fan of each state having their own regulations on abortion. With Roe v. Wade being overturned, that is now each state’s right, and I think it’s up to each state legislature to decide what is best for their state,” she added.

Abortion in Kansas is legal up until about the 22nd week of pregnancy, according to the Guttmacher Institute. Under state law, women seeking abortion care are subject to several regulations such as a 24-hour waiting period between seeking consultation and receiving the procedure and parental consent for minors.

Still, the rules are much less restrictive than those in neighboring states. In Missouri and Oklahoma, laws went into effect almost immediately after the Supreme Court ruling in late June that effectively banned nearly all abortion care in those states.

At least 22 states have already banned or will soon prohibit abortion. The new landscape makes Kansas a regional outlier and a safe haven for women in and out of state seeking abortion care — but that could diminish or disappear if the measure passes.

Sales of existing homes fell in May, and more declines are expected