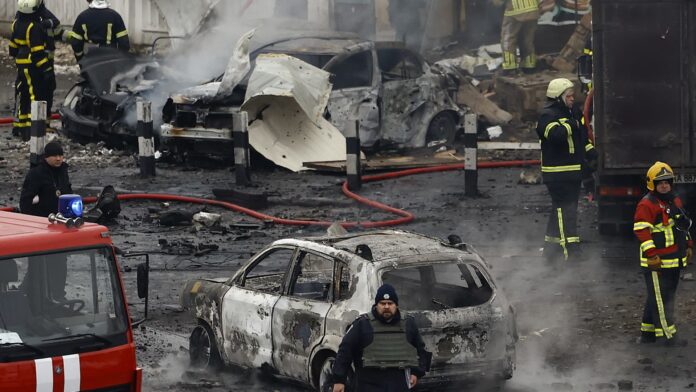 70% of Ukrainian capital Kyiv remains without power after strikes

Fire and rescue workers attend a building hit by a missile in central Kyiv on November 23, 2022 in Kyiv, Ukraine.

The mayor of Kyiv said 70% of the capital remains without electricity with energy workers operating all night to restore power supplies following missile attacks targeting the city Wednesday.

The water supply has already been restored on the left bank of the city. On the right, we plan to restore it in the first half of Thursday, Mayor Vitaly Klitschko said on Telegram Thursday morning.

“70% of the capital still remains without electricity. Energy companies are making every effort to return it as soon as possible. However, they note that this will depend on the restoration of balance in the energy system of Ukraine since Kyiv is part of the national energy system,” he said.

Ukraine’s Interior Minister Denys Monastyrsky said on Facebook that three apartment buildings had been hit and that 10 people had been killed. Kyiv was not alone in being targeted yesterday with President Zelenskyy telling the U.N. Security Council Wednesday that 70 Russian missiles had targeted energy and civilian infrastructure.

Russian missile strikes are a ‘crime against humanity,’ Zelenskyy says

Ukraine’s President Volodymyr Zelenskyy pleaded with the U.N. Security Council to act against Russia, saying it was responsible for a “crime against humanity” as Ukraine continues to suffer relentless missile strikes against its energy infrastructure.

Millions of civilians in Ukraine are living without power, water or heat as Russia continues to pound the country’s energy facilities as winter sets in. Ten people died yesterday as a result of further shelling, one Ukrainian official said.

“Today is just one day, but we have received 70 missiles. That’s the Russian formula of terror. This is all against our energy infrastructure,” Zelenskyy said via video link to the council, adding that “hospitals, schools, transport, residential districts all suffered.”

“When we have the temperature below zero, and further millions of people stay without energy supplies, without heating, without water, this is an obvious crime against humanity,” he said.

Ukraine was waiting to see “a very firm reaction” to Wednesday’s air strikes from the world, Zelenskyy added as he called upon the council to “make specific steps to protect humanity and life.”

The U.N. Security Council’s power to act is limited, however, as Russia is one of five permanent members and has the power to veto any action or resolution.

Permanent Representative of Russia to the United Nations Vasily Nebenzya.

Russia’s U.N. ambassador Vasily Nebenzya responded by claiming Russia was “conducting strikes against the infrastructure in response to the unbridled flow of weapons to Ukraine and the reckless appeals to defeat Russia.”

He also claimed that “weakening the military capacity of the Ukrainian army, which threatens the security and territorial integrity of Russia, is one of the goals of this special military operation and it will be carried out by military means until the Kyiv regime adopts a realistic position.”

The International Atomic Energy Agency spoke out for the second time this week about the ‘precarious’ position of the Zaporizhzhia Nuclear Power Plant. Over the weekend, the plant was damaged by heavy shelling and on Wednesday it was forced to go into “full blackout mode” due to continued Russian missile strikes.

Grossi also underscored the need for an off-site power supply to nuclear sites as one of the seven indispensable pillars for nuclear safety during armed conflicts, which Grossi outlined earlier this year. The plant is currently operating as if off-site power has been lost, relying on diesel generators.

“Reactors need power for cooling and other essential nuclear safety and security functions also when they are in shutdown mode and do not produce electricity anymore,” the IAEA said in a statement. “In the case of an external power loss, they have emergency diesel generators that can provide back-up electricity for a limited period of time, at least for 10 days in the case of the ZNPP.”

Grossi met a Russian delegation led by the Alexey Likhachev, director general of the Russian nuclear agency, Rosatom, in Istanbul earlier on Wednesday. The pair consulted on “operational aspects related to safety at the ZNPP and on the need to urgently establish a nuclear safety and security protection zone around the plant.”

Fire and rescue workers attend a building hit by a missile in central Kyiv on November 23, 2022 in Kyiv, Ukraine.

Russia’s missile strikes directed at civilian targets do not have a military purpose but are instead intended to increase Ukrainian suffering and death, the U.S. National Security Council said Wednesday.

“As Russia struggles on the battlefield, it is increasingly turning to horrific attacks against the Ukrainian people with punishing strikes damaging energy grid infrastructure, and deliberately doing so as winter approaches,” NSC spokesperson Adrienne Watson said.

“It also shows Russia is willing to increase the risk of a nuclear safety incident that could not only further harm Ukraine, but affect the entire region as well,” Watson said.

The NSC statement comes on the heels of U.S. President Joe Biden’s authorization of another $400 million in defense capabilities for Ukraine.

The 10 most accessible cities for people with disabilities