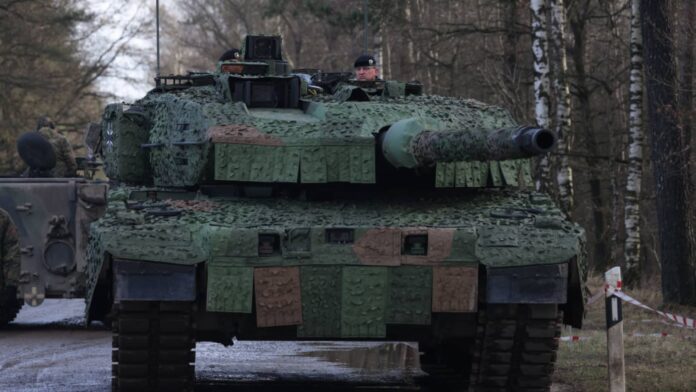 Ukrainian President Volodymyr Zelenskyy and his Polish counterpart Andrzej Duda at a press conference after their talks in Kyiv on May 22, 2022.

“I do not rule out that we are ready to take such a step,” Jablonski was quoted by Reuters as telling a private radio station.

“At the moment we are trying to make Germany not only agree these tanks being sent by Poland or other countries, but also to do so themselves.”

NATO allies are meeting at Germany’s Ramstein air base for a crucial decision on whether to send German Leopard 2 tanks from various European armies to Ukraine, a move that requires Berlin’s approval even for other countries because it is a German re-export.

Ukraine has long been pleading for the heavy weaponry it says is essential for pushing back against Russian forces, and its close ally Poland has echoed its calls. Germany has been slow to approve sending heavy weaponry to Ukraine for fear of provoking Russia.

“I think that if there is strong resistance, we will be ready to take even such non-standard action… but let’s not anticipate the facts,” Jablonski said.

Russian mercenary firm Wagner Group could have as many as 50,000 fighters in Ukraine: UK

The private military company formally registered as a legal entity in Russia just in December 2022, describing its core activity as “management consultancy,” despite years of documented combat activities in parts of Africa, the Middle East and now Ukraine.

“Wagner almost certainly now commands up to 50,000 fighters in Ukraine and has become a key component of the Ukraine campaign,” Britain’s Defense Ministry wrote in its update on Twitter.

Ukraine has repeatedly asked for battle tanks from its Western allies.

Defense chiefs of NATO countries are meeting at Germany’s Ramstein air base to discuss providing Ukraine with main battle tanks.

The decision is a long time coming, as Kyiv has been requesting tanks for months but Western allies have shown reluctance to oblige as they fear provoking Russia.

Germany has veto power to stop any effort by the 30-country alliance to send Kyiv its Leopard 2 tanks, which would be exported by armies in a number of NATO countries. German Chancellor Olaf Sholz has so far been reserved in his willingness to send certain powerful weaponry to Ukraine, drawing criticism from other supporters of the country.

Ukraine’s first lady called on businesses and politicians at Davos to keep funding humanitarian support for her war-weary country.

“First human, then capital. Humanity comes first. Values come first. And when we tell the world about protecting our country and rebuilding after hostilities, we mean, first of all, protecting people and restoring normal life for them as much as possible,” Olena Zelenska said during a panel discussion at the World Economic Forum in Davos, Switzerland.

A Russian flag flies next to the US embassy building in Moscow on December 7, 2021.

The State Department said it was aware of unconfirmed reports of an espionage investigation regarding a U.S. citizen in Russia.

“Generally, the Russian Federation does not abide by its obligations to provide timely notification, often detention of U.S. citizens in Russia,” deputy spokesman Vedant Patel said during a daily press briefing when asked about the matter.

“Russian authorities also don’t regularly inform the Embassy of the trials, sentencing or movement of U.S. citizens. We’re looking into this matter and we’ll continue to monitor,” Patel said, adding that the U.S. embassy in Moscow was engaging with Russian authorities.

Coinbase, FTX, Binance get inquiries from Congress on crypto scams

Celsius CEO resigns in the middle of bankruptcy proceedings