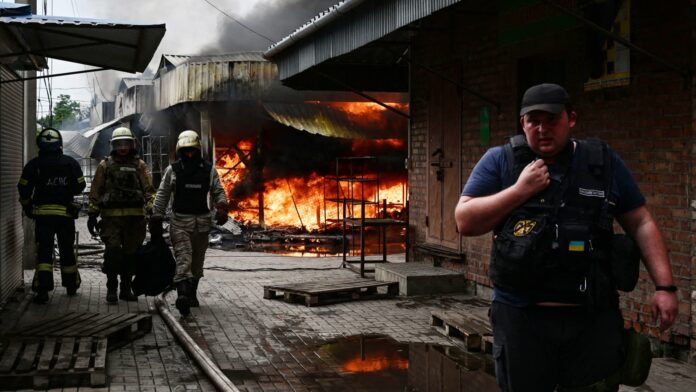 Russia’s Chechen allies vow to fight until Putin stops them

The Chechen allies of President Vladimir Putin have vowed to continue fighting in Ukraine, saying they would even go beyond the country, until the president stops them.

Pro-Russian Chechen fighters have been part of Russia’s forces in Ukraine and have a fearsome reputation in battle, being experienced in urban combat following several conflicts with Russia itself in the ’90s and 2000s before a rapprochement between Chechen leader Ramzan Kadyrov and Putin a few years ago.

It’s doubtful that Daudov’s comments reflect any official policy in Moscow. There are also Chechens fighting for Ukraine.

The battle for Sloviansk is fast approaching, UK says

A market in Sloviansk was struck on July 5, 2022, following a suspected missile attack amid the Russian invasion of Ukraine.

Britain’s Ministry of Defense said a battle for the major city of Sloviansk on the front line in Donetsk is coming. Russian forces are advancing into the province of Donetsk following their capture of neighboring region Luhansk.

“Russian forces from the Eastern and Western Groups of Forces are likely now around 16 km north from the town of Sloviansk. With the town also under threat from the Central and Southern Groups of Forces, there is a realistic possibility that the battle for Sloviansk will be the next key contest in the struggle for the Donbas,” the ministry said on Wednesday.

The ministry noted that Russia is likely continuing to consolidate its control over Lysychansk and the Luhansk Oblast (province) where there has been severe fighting for weeks on end, culminating last weekend with Russia’s capture of the last Ukrainian-held city in the province.

To the north of Sloviansk, the British noted, Russia has “committed most of the remaining available units from the Eastern and Western Groups of Forces to the Izium axis,” referring to the route between Sloviansk via Izium, to Kharkiv in the northeast of Ukraine.

“Over the last week, Russian forces have likely advanced up to another 5 km down the E40 main road from Izium, in the face of extremely determined Ukrainian resistance,” the ministry said.

Russia’s Parliament has taken several steps toward putting the country’s economy on a war footing, with two bills being passed in the State Duma that would allow the government to compel Russian businesses to supply the military with goods for the war effort.

Russia’s Parliament has taken several steps toward putting the country’s economy on a war footing, with two bills being passed in the State Duma (the lower house of Parliament) that would allow the government to compel Russian businesses to supply the military with goods for the war effort.

“The load on the defense industry has increased significantly. In order to guarantee the supply of weapons and ammunition, it is necessary to optimize the work of the military-industrial complex and enterprises that are part of cooperation chains,” Deputy Prime Minister Yuri Borisov told lawmakers Tuesday, according to a Reuters translation.

A second bill, also passed by the Duma after an initial reading, would amend the labor code. That means businesses supplying goods that assist the war effort could make their employees work at night, on weekends and holidays, and without annual leave, if necessary.

Both bills still need to undergo second and third readings in the Duma and must be approved by the upper chamber and signed off by President Vladimir Putin.

“The mobilization of the country’s economic and industrial potential to support the military is a tacit acknowledgment of significant losses incurred since the start of the invasion and approaching shortages of certain types of equipment,” Andrius Tursa, Central and Eastern Europe advisor at Teneo Intelligence, commented Tuesday.

“At the same time, Moscow could be seen as preparing to sustain its military operations in the longer run.”

Zelenskyy told Ukrainians not to “overthink,” saying, “you should not look for logic in the actions of terrorists.”

Ukraine’s President Volodymyr Zelenskyy said an air alert was announced over almost all of Ukraine on Tuesday night, leaving many civilians anxious after a period of relative calm in parts of the country.

“Before that, there had been no air alert in the capital and some regions for some time,” Zelenskyy said in his nightly address, adding that this had left many people wondering whether Russia was planning something.

Zelenskyy told Ukrainians not to “overthink,” saying, “you should not look for logic in the actions of terrorists.”

“The Russian army does not take any breaks. It has one task — to take people’s lives, to intimidate people — so that even a few days without an air alarm already feel like part of the terror.”

War crime prosecutor’s team member speaks on the phone next to buildings that were destroyed by Russian shelling, amid Russia’s Invasion of Ukraine, in Borodyanka, Kyiv region, Ukraine April 7, 2022.

“Growing evidence gives my office reasonable grounds to believe that serious violations of international humanitarian law in this regard have been committed by Russian armed forces,” Bachelet wrote in a statement.

Bachelet said that UN investigators have verified the recovery of more than 1,200 civilian bodies from Kyiv. She added that her office is working to corroborate more than 300 allegations of killings by Russian armed forces in situations that were not linked to active fighting.

“The arbitrary detention of civilians has also become widespread in territory controlled by Russian armed forces and affiliated armed groups. Despite restrictions on access, we have documented 270 cases of arbitrary detention and enforced disappearance,” she added.

The Kremlin has previously denied that its forces have committed crimes against civilians in Ukraine.

U.S. and allies call for suspension of Russia and Belarus from international sports, ban on official state flags at athletic events

A fan holds up a Russian flag during the luge relay event at the 2014 Winter Olympic Games in Sochi, Russia.

“National and international sports organizations should consider suspending the broadcasting of sports competitions into Russia and Belarus,” the State Department wrote in a statement adding that “official state Russian and Belarusian flags, emblems and anthems should be prohibited.”

“Furthermore, we reiterate our encouragement for the international sport community to continue to show its solidarity with the people of Ukraine, including through supporting the continuation and reconstruction of Ukrainian sport where possible,” the State Department wrote in a joint statement with representatives from more than 30 countries.

All 30 NATO member countries approved accession protocols for Finland and Sweden to join the military alliance, a significant step in NATO enlargement.

“With 32 nations around the table, we will be stronger and safer, as we face a more dangerous world,” Stoltenberg wrote on Twitter.

In May, both nations began the formal process of applying to the NATO alliance.

Denis Pushilin (C), leader of the separatists in the self-proclaimed Donetsk People’s Republic (DNR) arrives to deliver a press conference in Donetsk, on April 11, 2022.

Pro-Russian separatist forces from the self-styled Donetsk and Luhansk “People’s Republics” (known as the DPR and LPR) are moving toward the Donetsk province, the head of the DPR Denis Pushilin said on Tuesday, according to Russian state news agency TASS.

“We can already say that our corps, the first corps that took part and helped our brothers [in the liberation of the LPR], is already moving to the Donetsk direction as well as the second corps [from] Luhansk,” Pushilin said.

Russia and its proxies in eastern Ukraine call the capture of the Luhansk region, which happened last weekend, a “liberation” although Russia is widely seen as using a rationale of “protecting” the breakaway separatist areas, which were founded in 2014 as Russia annexed Crimea from Ukraine, as an excuse for invading Ukraine.

Some Meta employees claim they’re not getting promised severance