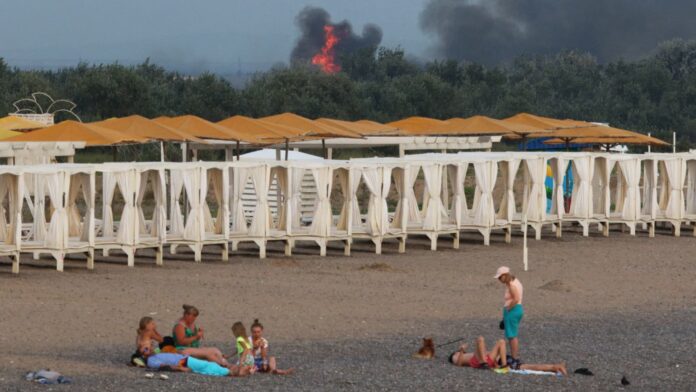 “Private homes were destroyed. There is no information about victims. Occupiers destroy everything in their path – a terrorist tactic,” he wrote in a translation provided by the platform. CNBC was not able to independently verify the details.

Kramatorsk was the site of a brutal Russian rocket attack in early April on a train station packed with civilians trying to flee the conflict. It has been subjected to months of Russian shelling, and by April its population had dropped from 200,000 to roughly 40,000, according to local officials.

Ukrainian President Volodymyr Zelenskyy called out his country’s officials for leaking information about military activities to the press, after stories in The New York Times and The Washington Post cited anonymous Ukrainian officials saying that Ukraine was behind this week’s attack on a Russian airbase in Crimea that destroyed several warplanes.

“War is definitely not the time for vanity and loud statements. The fewer details you divulge about our defense plans, the better it will be for the implementation of those defense plans,” Zelenskyy said in his nightly address.

“If you want to generate loud headlines, that’s one thing – it’s frankly irresponsible. If you want victory for Ukraine, that is another thing, and you should be aware of your responsibility for every word you say about our state’s plans for defense or counterattacks.”

Smoke rises after explosions were heard from the direction of a Russian military airbase near Novofedorivka, Crimea, on Aug. 9, 2022.

The explosions that hit the Saky airbase on Crimea would represent a major foray deep behind enemy lines for Ukrainian forces. Kyiv has not publicly taken responsibility for the attack, while Russia denies it was attacked.

While the cause of the explosions that rocked Russia’s Saky airbase in Crimea earlier this week is still unclear, Britain’s Ministry of Defense believes they were “almost certainly from the detonation of up to four uncovered munition storage areas,” according to its daily intelligence briefing posted on Twitter.

The ministry named the aircraft it believes was hit in the blasts, for which Ukrainian officials have not publicly claimed responsibility. Russia denies that it was attacked and that any of its planes were destroyed, despite satellite imagery released Thursday that shows eight aircraft destroyed or damaged.

A satellite image provided by Planet Labs shows destroyed Russian aircraft at Saky airbase in Crimea after an explosion on Aug. 9th, 2022.

“At least five Su-24 FENCER fighter-bombers and three Su-30 FLANKER H multi-role jets were almost certainly destroyed or seriously damaged in the blasts,” the U.K. ministry said in its post.

Eight combat jets are a small fraction of Russia’s full fleet, the ministry said, but Saky is an important base for Russia’s Black Sea naval fleet.

“The fleet’s naval aviation capability is now significantly degraded,” the post added. “The incident will likely prompt the Russian military to revise its threat perception. Crimea has probably been seen as a secure rear-area.”

US Army General Mark Milley, Chairman of the Joint Chiefs of Staff, holds a press briefing about the US military drawdown in Afghanistan, at the Pentagon in Washington, DC September 1, 2021.

National security advisor Jake Sullivan and Chairman of the Joint Chiefs of Staff Gen. Mark Milley spoke with their Ukrainian counterparts, according to a Pentagon readout of the call.

“They discussed the unprovoked and ongoing Russian aggression in Ukraine and international support for the Ukrainian armed forces. Sullivan and Milley reaffirmed the steadfast support of the United States for Ukraine’s sovereignty and territorial integrity,” the readout said of the call with Andriy Yermak of Zelenskyy’s office and Commander-in-Chief of the Ukrainian Armed Forces Gen. Valery Zaluzhny.

Secretary-General Antonio Guterres conducts a press briefing on the launch of the 3rd brief by the GCRG (Global Crisis Response Group) on Food, Energy and Finance at UN Headquarters.

“Regrettably, instead of de-escalation, over the past several days there have been reports of further deeply worrying incidents that could, if they continue, lead to disaster,” Guterres said in a statement.

“We must be clear that any potential damage to Zaporizhzhia or any other nuclear facilities in Ukraine, or anywhere else, could lead to catastrophic consequences not only for the immediate vicinity, but for the region and beyond. This is wholly unacceptable,” he added.

Guterres also urged Moscow and Kyiv to agree on a path that would grant the IAEA, a nuclear watchdog agency, access to the site.