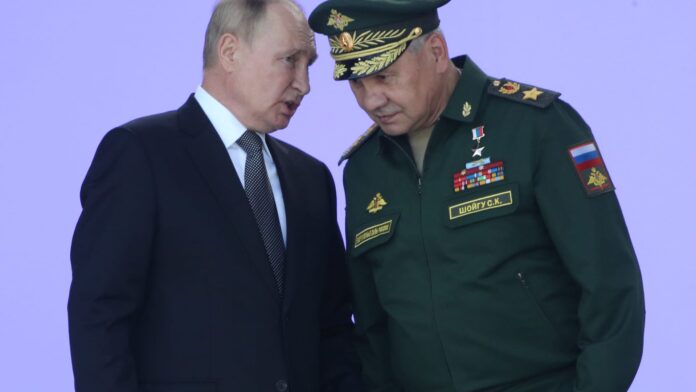 The Zaporizhzhia nuclear power plant, the largest such plant in Europe, seen here in 2019.

Tensions remain high over the status and fate of Ukraine’s Zaporizhzhia nuclear power plant — Europe’s largest such plant — with President Volodymyr Zelenskyy once again calling for international action to prevent a catastrophe at the Russian-occupied facility in southern Ukraine.

“Any radiation incident at the Zaporizhzhya NPP could be a blow to many countries,” Zelenskyy said on Telegram last night. “Everything depends only on the direction and strength of the wind,” he added.

The president once again called for “new tough sanctions against Russia, against Rosatom [Russia’s state-owned nuclear power giant] and the entire nuclear industry” within the country.

Zelenskyy and other Ukrainian officials have repeatedly said Russia has stationed troops and weapons at the power plant, and used it as a base from which to launch attacks on surrounding areas. Ukraine has called that a strategy of “nuclear blackmail.”

“Russia does not stop its blackmail actions at Zaporizhzhia nuclear power plant and around it,” Zelenskyy reiterated in his nightly address, saying “provocative shelling of the Nuclear power plant territory continues. Under cover of the station, the occupiers are shelling nearby towns and communities. The Russian military hides ammunition and equipment right in the station’s facilities.”

Calling for Russian forces to withdraw from the nuclear power facility and surrounding areas without any conditions, Zelenskyy said the world should know by now the dangers of uncontrolled nuclear activity.

“For many decades, the world has struggled for proper control over all activities with nuclear materials and radiation safety. And if now the world lacks the strength and determination to protect one nuclear plant, it means that the world will lose. There is still a chance to prevent this loss,” he said.

Secretary-General Antonio Guterres conducts a press briefing on the launch of the 3rd brief by the GCRG (Global Crisis Response Group) on Food, Energy and Finance at UN Headquarters.

Russia’s Sergei Shoigu discussed the safe operation of the facility and gave an update on events taking place on the ground, according to a Kremlin statement posted on the Telegram messaging app.

The two also discussed the U.N. initiative to facilitate the export of Russian fertilizers as well as Ukrainian agriculture products.

U.N. denies Russian claims that it is blocking inspectors from visiting nuclear plant

The spokesman for the U.N. Secretary-General denied Russian claims that U.N. officials were canceling or blocking visits from the International Atomic Energy Agency to the Zaporizhzhia nuclear power plant.

“First, the IAEA is a specialized agency that acts in full independence in deciding how to implement its specific mandate. Second, the U.N. Secretariat has no authority to block or cancel any IAEA activities,” wrote U.N. Secretary-General spokesman Stéphane Dujarric in a statement.

Dujarric added that the U.N. supports a potential IAEA mission to the Zaporizhzhia nuclear power plant, should both Russia and Ukraine agree.

A serviceman with a Russian flag on his uniform stands guard near the Zaporizhzhia Nuclear Power Plant outside the Russian-controlled city of Enerhodar in the Zaporizhzhia region, Ukraine, on Aug. 4, 2022.

The Zaporizhzhia nuclear power plant is operating with the risk of violating radiation and fire safety standards, according to an update from Ukrainian President Volodymyr Zelenskyy’s office.

Russian forces took control of the facility in March, a few days after the Kremlin’s full-scale invasion of Ukraine began.

“Ukraine calls on the world community to take urgent measures to force Russia to give back control over the Zaporizhzhia nuclear power plant for the sake of the security of the whole world,” the statement added.

Putin boasts about Russia’s weapons technology, claims it’s years ahead of others

“Promising models and systems that are future-oriented and will determine the future of the armed forces are of particular interest,” he said. Putin was speaking at the opening of the “Army 2022” international military-technical forum on Monday.

“We are talking about high-precision weapons and robotics, about combat systems based on new physical principles,” Putin said, according to Russian state news agency Interfax. “Many of them are years, maybe decades ahead of their foreign counterparts, and in terms of tactical and technical characteristics they are significantly superior.”

Speaking at the opening of the forum, Putin said Russia was ready to share its weapons technology with its allies.

“Russia sincerely values ​​historically strong, friendly, truly trusting ties with the states of Latin America, Asia, and Africa, and is ready to offer its partners and allies the most modern types of weapons – from small arms to armored vehicles and artillery, combat aircraft and unmanned aerial vehicles,” the president said.

Commenting on the increasingly polarized nature of global geopolitics, particularly amid Russia’s war in Ukraine, Putin said Russia appreciated “that today our country has many allies, partners, like-minded people on different continents.”

These are states that, he said, “do not bend before the so-called hegemon, their leaders show real masculine character and do not bend.”

A serviceman with a Russian flag on his uniform stands guard near the Zaporizhzhia Nuclear Power Plant outside the Russian-controlled city of Enerhodar in the Zaporizhzhia region, Ukraine, on Aug. 4, 2022.

The U.S., U.K., EU and other countries have called on Russia to immediately withdraw its military forces from the Zaporizhzhia Nuclear Power Plant and all of Ukraine.

“We urge the Russian Federation to immediately withdraw its military forces and all other unauthorized personnel from the Zaporizhzhia Nuclear Power Plant, its immediate surroundings, and all of Ukraine so that the operator and the Ukrainian authorities can resume their sovereign responsibilities within Ukraine’s internationally recognized borders and the legitimate operating staff can conduct their duties without outside interference, threat, or unacceptably harsh working conditions,” said a joint statement published on Sunday on the website of the EU Delegation to the International Organizations in Vienna.

The statement, endorsed by 42 countries, said Russia’s control of the Zaporizhzhia Nuclear Power Plant — Europe’s largest nuclear power plant — “poses a great danger” to the international tenets regarding nuclear safety and security, as outlined by the International Atomic Energy Agency.

“Deployment of Russian military personnel and weaponry at the nuclear facility is unacceptable and disregards the safety, security, and safeguards principles that all members of the IAEA have committed to respect,” the statement said.

The Zaporizhzhia Nuclear Power Plant is the largest nuclear power plant in Europe and there was widespread consternation when Russian forces captured the unit on March 4, with reports of military equipment and ammunition being placed there.

Russian and Ukrainian forces have accused each other of shelling the power plant in recent weeks, raising fears of a catastrophic incident at the plant.

Crypto crash may leave ad-supported businesses with hole in budget

Opportunities await investors in the tech sector. Here is a corner that’s ripe for growth