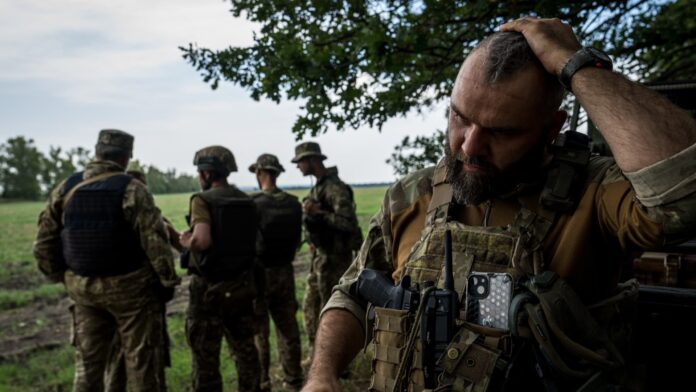 The leader of one of the pro-Russian breakaway regions in eastern Ukraine has reportedly pledged to increase cooperation with North Korea, echoing a similar sentiment from Russian President Vladimir Putin earlier this week.

North Korean state news agency KCNA reported Wednesday that the secretive country’s leader, Kim Jong Un, had received a congratulatory message from Denis Pushilin, head of the so-called “People’s Republic of Donetsk” on Aug. 15, in which Pushilin congratulated Kim on the country’s national “Liberation Day” and expressed a hope to extend cooperation between North Korea and the separatist region.

“The message expressed the conviction that an equally beneficial bilateral cooperation agreeing with the interests of the peoples of the two countries will be achieved between the People’s Republic of Donetsk and the Democratic People’s Republic of Korea,” KCNA reported.

The “People’s Republic of Donetsk” is not a country and, while backed by Russia, has little legitimacy on the global stage.

Russia recognized the “independence” of the DPR, and the neighboring breakaway “republic” in Luhansk on Feb. 21 just days before its full-scale invasion of Ukraine on Feb. 24. But only North Korea and Syria, an ally of Russia, and two other pro-Russian breakaway regions of South Ossetia and Abkhazia, both in Georgia, followed suit.

Smoke billows and explosions erupt from a Russian munitions depot in Dzhankoi on August 16, 2022. Moscow blamed the catastrophic event on a fire that spread and detonated ammunition.

Recent explosions at Russian military facilities in Crimea are evidence of a deteriorating security situation for the Kremlin in a critical region that Russia has controlled since 2014, according to a British assessment released Wednesday.

Russian and Ukrainian officials said on Tuesday that a Russian ammunition dump exploded in northern Crimea near Dzhankoi, and smoke was also reported rising from Russia-controlled Gvardeyskoye Airbase in Crimea.

The British Ministry of Defence acknowledged that the causes behind the Dzhankoi and Gvardeyskoye events are still undetermined, “but Russian commanders will highly likely be increasingly concerned with the apparent deterioration in security across Crimea, which functions as [a] rear base area for the occupation.”

The press office of the Russian Defence Ministry did not immediately respond to a CNBC request for comment.

Moscow has blamed previous base explosions on lax safety practices or denied them outright, inviting ridicule from Ukraine and its supporters.

Russia invaded Crimea, then part of Ukraine, in 2014 after Ukrainian protesters and widespread civilian unrest ousted a Moscow-friendly government from Kyiv.

The head of Ukraine’s armed forces has said that Russian forces continue to advance along the entire front line, which he described as “intense but fully controlled,” adding that Russia launches 700 to 800 attacks on Ukraine’s positions every day.

“The enemy continues to advance along the entire front line. At the same time, the enemy carries out approximately 700-800 shelling of our positions every day, using from 40 to 60 thousand [pieces of] ammunition,” Commander in Chief of the Armed Forces of Ukraine Valerii Zaluzhnyi said in comments published on his Telegram channel after he had spoken to his Canadian counterpart General Wayne Donald Eyre.

“The enemy’s main efforts are concentrated on pushing our troops back from the Donetsk oblast [province],” he added.

The port of Mykolaiv in southern Ukraine, the northeastern city of Kharkiv, Marganets and Nikopol near Zaporizhzhia in the south and Bereznehuvate, near Mykolaiv, were the most affected settlements by “hostile shelling,” he added.

He also said the positioning of missile systems along the Belarus-Ukraine border, in particular at the Zyabrovka airfield, “triggers concern.”

Smoke rises after explosions were heard from the direction of a Russian military airbase near Novofedorivka, Crimea August 9, 2022.

Ukrainian President Volodymyr Zelenskyy asked people in Crimea and other heavily occupied areas of Ukraine to not go near Russian military installations amid reports of explosions.

“Every day and every night we see new reports of explosions on territory that is temporarily taken by the occupiers. And I am asking now all our people in Crimea, in other regions in the south of Ukraine, in occupied areas of Donbas and Kharkiv region to be very careful,” Zelenskyy said on the Telegram messaging app during an evening address.

“Please, do not go near the military installations of the Russian army and all those places where they store ammunition and equipment, where they place their headquarters,” he added.

IKEA to liquidate Russian unit as part of sanctions-led pullout

Swedish furniture giant IKEA has decided to liquidate its Russian unit, limited liability company IKEA Dom, further scaling back its operations after more than a decade-long presence in the country, a corporate record showed on Tuesday.

IKEA, the world’s biggest furniture brand, shut down its stores in March and said it would sell factories, close offices and reduce its 15,000-strong workforce in Russia.

Ingka Group, IKEA stores owner and one of the world’s leading shopping center owners, however, has kept its “Mega” shopping malls in Russia open.

According to the record at Interfax news agency’s Spark database of Russian companies on Tuesday, Ingka Holding Europe B.V. decided to liquidate IKEA Dom where it is the sole owner. IKEA Dom was established in July 2006.

In June, Ingka Group said it was open to returning to Russia one day but the conditions were not in place right now. read more Ingka Group did not immediately reply to a Reuters request for a comment on Tuesday.

U.N. secretary-general will visit Ukraine and meet with Zelenskyy

Secretary-General of the United Nations Antonio Guterres speaks to press about war in Ukraine at the Security Council Stakeout of UN headquarters in New York City, United States on March 14, 2022.

United Nations Secretary-General Antonio Guterres will travel to Lviv this week to meet with Turkish President Recep Tayyip Erdogan and Ukrainian President Volodymyr Zelenskyy. The trio is expected to discuss the ongoing Black Sea Initiative to export grains from Ukraine.

“It’s a chance for [the Secretary General] to see firsthand the results of an initiative that he first presented when he went to Moscow,” U.N. spokesperson Stephane Dujarric said during a daily press briefing.

“An initiative that is so critically important to hundreds of millions of people, that is part of a bigger package, which includes the export of Russian grain and add fertilizer to market,” he added.

The secretary-general will also meet with Zelenskyy to dsicuss the Zaporizhzhia nuclear power plant. He is not expected to speak with any Russian officials while on the U.N. mission.

Later in the week, Guterres will visit the port of Odesa.

Emmanuel Macron, France’s president, will have a more difficult time in his second mandate after losing his parliament majority.

French President Emmanuel Macron spoke with Ukrainian President Volodymyr Zelenskyy about the Zaporizhzhia nuclear power plant, according to a French presidential office readout of a phone call between the leaders.

Macron expressed his concern about the threat posed by the Russian military’s actions near Ukrainian nuclear installations and called for the immediate withdrawal of these forces.

“[Macron] expressed his support for the proposal of the Director General of the International Atomic Energy Agency to send a mission on site as soon as possible, and the two presidents discussed the terms of such a mission,” according to the readout.

The two leaders also discussed the export of Ukrainian agricultural products through a U.N.-brokered sea corridor.

The 21 vessels that have left Ukrainian ports are taking hundreds of thousands of metric tons of corn, wheat and other agricultural products around the world, according to the organization overseeing their export.

The Joint Coordination Center, a humanitarian initiative of Ukraine, Russia, the United Nations and Turkey, said the breakdown of exports includes the following: