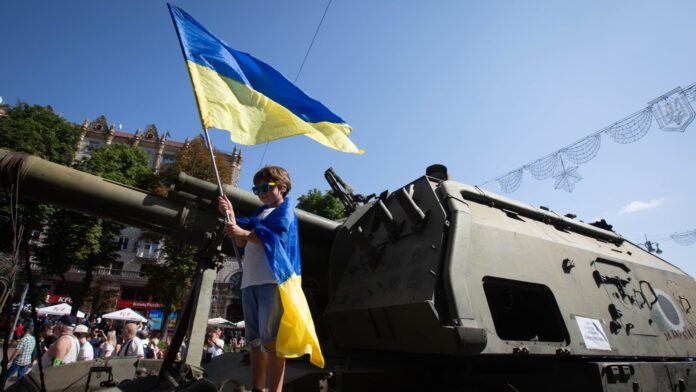 The White House issued a statement from President Joe Biden congratulating Ukraine on its 31st anniversary of independence, in which he reaffirmed his administration’s support for the country in its war against Russia.

“Over the past six months, Ukrainians have inspired the world with their extraordinary courage and dedication to freedom. They have stood resolute and strong in the face of Russia’s full scale invasion of Ukraine. And today is not only a celebration of the past, but a resounding affirmation that Ukraine proudly remains – and will remain – a sovereign and independent nation,” Biden’s statement read.

It highlighted the latest U.S. security assistance package for Ukraine totaling roughly $2.98 billion, its largest yet. In the past six months since the war began, Ukraine has lost thousands of civilian and combatant lives, seen swathes of cities and infrastructure destroyed, and had its population depleted by at least 10 million as people flee to other countries.

“I know this independence day is bittersweet for many Ukrainians as thousands have been killed or wounded, millions have been displaced from their homes, and so many others have fallen victim to Russian atrocities and attacks,” Biden’s statement continued.

It added that the U.S. “looks forward to continuing to celebrate Ukraine as a democratic, independent, sovereign and prosperous state for decades to come.”

U.S. President Joe Biden announced a new $3 billion military aid package for Ukraine, the largest yet since Russia launched its full invasion of Ukraine on Feb. 24.

“The United States of America is committed to supporting the people of Ukraine as they continue the fight to defend their sovereignty,” Biden said as he announced the package.

The U.S. is by far the largest supplier of military and financial aid to Ukraine as it fights to defend itself from Russian forces, and has committed more than $10.5 billion to the country in the last six months.

The U.K. may decide to toughen visa conditions for Russians entering the country, British Defense Secretary Ben Wallace told BBC Radio, though he questioned the wisdom of an outright ban on Russian citizens, which has been called for by some European leaders.

“I certainly think we can toughen up the conditions of our visas. I am not sure whether an outright ban is the right way,” Wallace said.

“I think that’s a matter for the home secretary to look at. But I don’t like … watching oligarchs’ wives or indeed Russian senior officials’ wives enjoying themselves in Greece or the south of France, or on superyachts around the world while their army is committing war crimes in Ukraine,” he added.

Estonia, Finland and the Czech Republic have all called for an EU-wide ban on the entry of Russian tourists from the Schengen free movement area. The move would serve as further punishment for Russia’s invasion of Ukraine, supporters of the ban say.

U.S. President Joe Biden has also signaled he is not in favor of an outright ban on Russian travelers.

Former U.S. ambassador says outcome of war difficult to predict, but ‘no sign of Ukraine fatigue yet’

“The end is not in sight,” said former U.S. ambassador to Georgia and Kazakhstan, William Courtney, who added that the outcome of the war is difficult to predict. Ukraine marked the sixth month since Russia invaded the country.

Courtney, who is now an adjunct senior fellow at Rand Corporation, added that while Russia is likely to “undertake some kind of attack” on Ukraine’s Independence Day, Russia is not in a position to alter the outcome of the war.

“It doesn’t appear that Russia is in a position to make an advance … this is not something that will affect the outcome of the fighting,” he said.

Russia’s continued assault can continue “as long as the Kremlin retains support,” the senior fellow said, but cautioned that the disposable incomes of households in Russia have considerably dropped since its first invasion of Ukraine in 2014, and are “going down further.”

Courtney noted that inflation in Russia is much higher than wage growth, and that “there’s a potential for public unrest.”

When asked about the likelihood a diminishing Western union against Russia, Courtney said that there is “no sign of Ukraine fatigue yet.”

“There is a strong feeling in Europe that what Russia is doing is a direct attack on not only European security, but European values,” he said. “This war was Russia-Ukraine, but it’s now become a proxy war between Russia and the West, so we are seeing Europe stand quite tall.”

Russia’s war in Ukraine after 6 months: Reversal of fortunes, but no end in sight

Ukraine marks the sixth month of Russia’s invasion, and analysts are expecting the conflict to be a long, grinding “war of attrition” with no end in sight.

Geopolitical analyst and associate fellow at the Royal United Services Institute, Sam Ramani, said there has been something of a reversal in Russia’s fortunes since the start of the invasion.

“In the first month of the war, the stronghold for Russia was really southern Ukraine. They took over Kherson very quickly and two thirds of Zaporizhzhia. They had Snake Island. The whole of the Black Sea coast was almost under their control,” he said, adding that “now they’re vulnerable in the south.”

Russian troops in recent months pulled out of Snake Island and occupied areas, such as Crimea and Kherson. Additionally, Russian forces are seeing rising numbers of Ukrainian strikes in what could be the start of Kyiv’s counteroffensive to reclaim lost territory in the south.

The shipping of grain exports from Ukrainian ports has also been able to resume under a U.N.-Turkey brokered deal between Moscow and Kyiv, bringing an end to a months-long Russian blockade.

In spite of these gains by Ukraine, many analysts have been left asking where and when Ukraine will launch a counteroffensive in the south like they announced.

Max Hess, a fellow at the Foreign Policy Research Institute, a U.S.-based think tank, told CNBC that the outlook for the next six months is likely to resemble a quagmire, both physically on the ground and on a geopolitical level, with neither side able to make advances and no impetus for a return to cease-fire negotiations after talks failed earlier this year.

A boy with Ukrainian national flags poses on a destroyed Russian military vehicle displayed on the main street of Khreshchatyk in Kyiv, as part of the country’s Independence Day celebrations.

The country regained its independence following the fall of the Soviet Union in 1991, declaring itself neutral and establishing a limited partnership with the ex-Soviet Commonwealth of Independent States and later joining NATO’s Partnership for Peace in 1994.

The country is currently on high alert as intelligence agencies in both Ukraine and the United States anticipate intensified Russian attacks on Ukrainian infrastructure, and the capital Kyiv has banned large gatherings for most of this week.

Kyiv’s main boulevard is lined with captured Russian tanks and other military hardware, representing the defiance and resilience of the country, which Moscow and many other governments had expected to fall to invading forces within days.

Ukrainian soldier Igor Ryazantsev with the Dnipro-1 regiment keeps watch outside his tent during a period of relative calm around their position near Sloviansk, Donetsk region, eastern Ukraine, Friday, Aug. 5, 2022. Members of the unit believe a Russian advance could be impending with the aim of seizing the strategic city.

“Sanctions should be tightened and loopholes closed. Russian citizens should face a Schengen Zone tourist visa ban, with only humanitarian cases permitted to enter the EU,” Reznikov wrote for the Atlantic Council.

“The current war is not just about Ukraine. It is a struggle to determine who gets to set the rules the whole world will live by,” he wrote.

“It is also a wake-up call for the many Europeans still in denial over the threat facing the continent from a hostile Russia,” he added.

A local resident, Raisa Kuval, 82, reacts next to a damaged building partially destroyed after a shelling in the city of Chuguiv, east of Kharkiv, on July 16, 2022.

Russia’s war in Ukraine has left about 17.7 million people in serious need of humanitarian aid, according to United Nations estimates.

The U.N. also warned that the crisis will affect more people as the harsh winter season approaches.

The United Nations estimates that humanitarian organizations have scaled up operations in order to reach 11.7 million people since Russia’s war in Ukraine began six months ago.