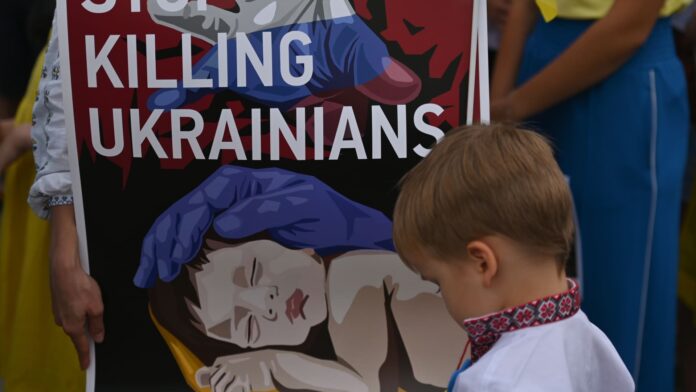 The State Department slammed Moscow’s “so-called tribunals” in the Russian-controlled city of Mariupol.

“The Kremlin is attempting to deflect responsibility for President Putin’s war of aggression and distract from the overwhelming evidence of the atrocities Russian forces have committed in Ukraine,” State Department spokesman Ned Price wrote in a statement.

Price called the trials a “mockery of justice” and called on Moscow to comply with international law.

“All members of Ukraine’s armed forces, including domestic and foreign volunteers incorporated into the armed forces, are entitled to prisoner of war status if they are captured and must be afforded the treatment and protections commensurate with that status, according to the Geneva Conventions,” Price added.

The organization overseeing the export of agricultural products from Ukraine said that so far a total of 769,986 metric tons of grains and other foodstuffs have departed through the humanitarian sea corridor under the Black Sea Grain Initiative.

The Joint Coordination Center, or JCC, said that more than 30 ships carrying grains and other crops have left Ukrainian ports.

The JCC also said that it authorized the movement of three outbound merchant vessels to depart from Ukrainian ports.

Twenty-five people are now confirmed dead after a Russian rocket attack on a train station in central Ukraine, according to Ukrainian newspaper the Kyiv Independent.

The strikes took place on Aug. 24, Ukraine’s Independence Day, ahead of which Ukrainian President Volodymyr Zelenskyy warned that Russia may launch a “particularly cruel” attack on the country.

Rockets hit a train and residential areas of the town of Chaplyne in the central Dnipropetrovsk region, regional officials said, initially killing 15 and wounding at least 50. Four trains were set aflame and two children were killed in the attack, according to the presidential office’s deputy head, Kyrylo Tymoshenko.

A serviceman with a Russian flag on his uniform stands guard near the Zaporizhzhia nuclear power plant outside the Russian-controlled city of Enerhodar in the Zaporizhzhia region, Ukraine, on Aug. 4, 2022.

Concerns continue to mount over the situation at the Zaporizhzhia nuclear power plant in southern Ukraine, which has been occupied by Russian forces since March.

Ukrainian and Western officials have warned of “false flag” actions by Russia, through which Russian forces may stage an attack and blame it on Ukrainian forces as a justification to escalate action.

“Russia is probably prepared to exploit any Ukrainian military activity near ZNPP for propaganda purposes,” Britain’s Ministry of Defense wrote on its daily intelligence update on Twitter.

“While Russia maintains the military occupation of ZNPP, the principal risks to reactor operations are likely to remain disruption to the reactors’ cooling systems, damage to its back-up power supply, or errors by workers operating under pressure,” the post added.

The U.K. announced a £54 million ($64 million) new weapons package for Ukraine’s Armed Forces that will include 2,000 drones and loitering munitions, a government statement said.

The package includes 850 hand-launched Black Hornet micro-drones, “which are specifically designed for use in towns and villages, and are deployed to detect approaching enemy forces,” the statement said.

Military personnel can learn to fly these drones, which are smaller than a cell phone, in less than 20 minutes, according to the U.K. government.

The U.K. is also set to send Ukraine mine-hunting vehicles to enable it to detect Russian mines in its waters. In the next few weeks, Ukrainian soldiers undergoing training in the U.K. will be taught how to use them in British waters. The U.K. is also expanding its training program for Ukrainian troops.

The organization overseeing the export of agricultural products from Ukraine said that five ships carrying grains and other crops were approved to depart Ukrainian ports Thursday.

In total, the five vessels are carrying 85,110 metric tons of grain and food products under the Black Sea Grain Initiative.

Europe will not be blackmailed into ‘offering Ukraine on a silver platter to Putin’, says former U.S. ambassador

Europe will not be blackmailed into “offering Ukraine on a silver platter to Putin,” said Former United States Ambassador to Ukraine John Herbst when asked if Russia’s weaponization of energy flows through Nord Stream will break Europe’s resolve to continue lending support to Ukraine.

“I believe Europe as a whole will remain supportive of Ukraine and will not be blackmailed by this,” said Herbst, who is now senior director of the Atlantic Council’s Eurasia Center. “And I believe they’ll make it through the winter albeit with some hardship.”

Herbst added that “the end will come sooner” for Russia’s war in Ukraine if the Biden administration sent more advanced weapons to Ukraine and in greater quantities.

“United States and the West need to provide Ukraine weapons as long as Moscow’s conducting a war of aggression in Ukraine, and this may require many years.”

Kirby added that the Biden administration will not view the outcome of the referendum as legitimate.

“Since they obviously are having trouble achieving geographic gains inside Ukraine, they are trying to gain that through false political means,” Kirby told reporters.

“We expect Russia to try to manipulate the results of these referenda, to falsely claim that the Ukrainian people want to join Russia,” he added.

Ukraine’s President Volodymyr Zelenskyy stands at Independence Square as he congratulates Ukrainians on Independence Day, amid Russia’s attack on Ukraine, in Kyiv, Ukraine, in this handout picture released August 24, 2022.

Ukraine’s president says Russian forces have launched a rocket attack on a railroad station in central Ukraine on the country’s Independence Day, killing at least 15 people and wounding about 50.

Wednesday is a national holiday in Ukraine commemorating the country’s declaration of independence from the Soviet Union in 1991. It also marks the six-month point in the war against Russia.

Alphabet is still a buy despite uncertain macro ahead, analysts say after earnings

8 shows coming to Netflix, Hulu and Disney+ in August