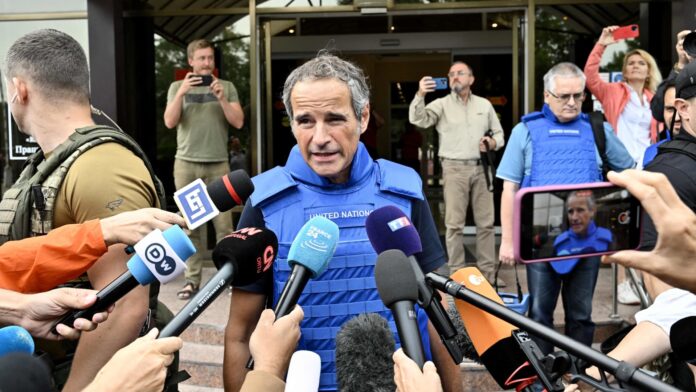 Russian Foreign Minister Sergei Lavrov warned the eastern European country of Moldova that any threat against the security of Russian forces in the breakaway region of Transnistria would be considered an attack against Moscow.

“Everyone should understand that any kind of actions that will raise a threat to the security of our servicemen will be considered in accordance with international law as an attack on the Russian Federation,” Lavrov said, according to the Associated Press.

Internationally recognized as part of Moldova, Transnistria is situated on Ukraine’s southwestern border and is home to a sizeable pro-Russian separatist population.

Lavrov’s comments have renewed fears that the region could be at risk of being drawn into the Russia-Ukraine conflict. Moldova’s foreign ministry reportedly summoned the acting Russian ambassador to clarify the situation.

U.N. inspectors vowed to continue their visit to a Russian-held nuclear power plant in southern Ukraine despite an early shelling attack on the town next to the facility.

The head of the International Atomic Energy Agency, the U.N.’s nuclear watchdog, is adamant that the team will maintain a continued presence at the Russian-occupied Zaporizhzhia nuclear plant in Ukraine.

His comments come as both Russia and Ukraine say they fear a possible radiation disaster as a result of intense shelling at Europe’s largest nuclear power plant. The IAEA was finally able to visit the site on Thursday after a delay of several hours.

“We are not going anywhere,” Grossi told reporters. “The IAEA is now there, it is at the plant and it is not moving. It is going to stay there. We are going to have a continued presence there at the plant.”

While the EU is on track to beat targets for filling gas storage facilities, analysts warn that this alone will not be enough.

Russia’s energy influence over Europe appears to be coming to an end, energy and political analysts say, potentially alleviating the risk of further supply disruptions.

Europe in recent months has endured a sharp drop in gas exports from Russia, traditionally its largest energy supplier.

A bitter gas dispute between Brussels and Moscow following Russia’s invasion of Ukraine has exacerbated the risk of recession and a winter gas shortage. What’s more, many fear Russia could soon turn off the taps completely.

Asked whether Russia’s energy influence over Europe may be coming to an end, Agathe Demarais, global forecasting director at The Economist Intelligence Unit, told CNBC, “Yes. Actually, very much so.”

“And what that means is that Russia’s energy weapon is going to become moot,” she added.

6 years-old twins Artur (L) and Dawid from Odessa are seen waiting at the railway station in Przemysl, southeastern Poland, on April 6, 2022.

Nearly 4 million of those people have applied for temporary resident status in neighboring Western countries, according to data collected by the agency.

“The escalation of conflict in Ukraine has caused civilian casualties and destruction of civilian infrastructure, forcing people to flee their homes seeking safety, protection and assistance,” the U.N. Refugee Agency wrote.

Ukrainian President Volodymyr Zelenskyy said in a nightly address that both Ukrainian and international journalists were not allowed to tour the Zaporizhzhia nuclear power plant with IAEA representatives.

“Today, the IAEA mission arrived at Zaporizhzhia nuclear power plant. It is good that it happened, the fact itself, despite all the provocations of the Russian military and the cynical shelling of Enerhodar and the territory of the station,” said in an update on the Telegram messaging app, according to an NBC News translation.

Zelenskyy added that the head of the International Atomic Energy Agency, Rafael Grossi, promised him that independent journalists would accompany the inspectors.