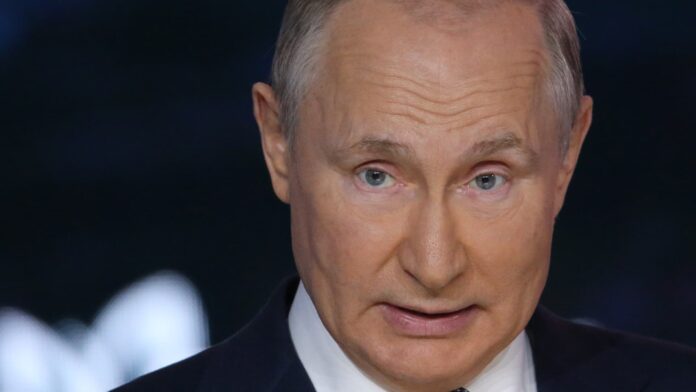 Putin says sanctions are a “danger” to the world

Russian President Vladimir Putin slammed the West again on Wednesday, saying sanctions imposed on Russia for its invasion of Ukraine are a “danger” to the world.

“The pandemic has been replaced by new challenges of a global nature, carrying a threat to the whole world, I’m talking about the sanctions rush in the West and the West’s blatantly aggressive attempts to impose their modus vivendi on other countries, to take away their sovereignty, to submit them to their will,” he said, addressing delegates at Russia’s Eastern Economic Forum in Vladivostok, a port city on Russia’s Pacific coast.

Russian President Vladimir Putin said the West has been reluctant to recognize “irreversible tectonic shifts” in international relations and that the Asia-Pacific region has become a magnet for human resources, capital and production capacities.

Putin said there’s “nothing new” about the West’s policy but added that the current situation was precipitated by the United States’ “slipping dominance” in global politics and economics.

He added that the West has been reluctant to recognize “irreversible tectonic shifts” in international relations and that the Asia-Pacific region has become a magnet for human resources, capital and production capacities.

“Despite that, the Western countries are trying to maintain the old world order that only benefitted them,” he said.

Ukraine has launched a counterattack in Kharkiv, officials suggest

Ukraine has launched a counterattack in the Kharkiv region in the northeast of the country, with several reports of fighting in the town of Balakliia, which lies between the cities of Kharkiv and Izyum.

Overnight and early this morning, the head of the Kharkiv regional state administration, Oleg Synegubov, posted on Telegram that Russian forces were shelling various parts of Kharkiv, the second-largest city in Ukraine, and fighting was taking place in the province.

“Active fighting continues on the contact line. The enemy continues to intensively fire at the positions of our military, the Armed Forces of Ukraine are retaliating. As a result of the successful actions of our defenders, the occupiers from private military companies suffered great losses in the temporarily occupied Oleksandrivka,” he said on Telegram.

A building damaged after an attack by Russian forces in Kharkiv, Ukraine, on Sept. 06, 2022.

In its latest military update, Ukraine’s armed forces said Russia had launched missile and air strikes on civilian infrastructure “in the areas of Kharkiv” and elsewhere in eastern and southern Ukraine, where the fighting remains most intense between the forces. CNBC was unable to independently verify the reports.

Analysts at the Institute for the Study of War said in an overnight update that “Ukrainian forces have launched likely opportunistic counterattacks in southern Kharkiv Oblast [province] and retaken several settlements.”

The analysts noted that Russian redeployments of forces from this area to defend against the Ukrainian counteroffensive in Kherson, southern Ukraine, “likely prompted and facilitated these counterattacks.”

Last night, Serhiy Leshchenko, an advisor to President Zelenskyy, tweeted that there would be “great news” from the president regarding the “counteroffensive operation in Kharkiv region.” The tweet has since been deleted and Zelenskyy made little reference to the region in his nightly address.

Ukraine has become tight-lipped about its counteroffensive in southern Ukraine in order not to reveal its military strategies and objectives to Russia.

NATO Secretary General Jens Stoltenberg talks speaks during a joint press with Sweden and Finland’s Foreign ministers after their meeting at the Nato headquarters in Brussels on January 24, 2022.

Six NATO member countries have yet to sign ratification protocols for Finland and Sweden to join the military alliance.

In May, both nations began the formal process of applying to NATO as Russia’s war in Ukraine raged. All 30 members of the alliance have to ratify Sweden and Finland into the group.

Greece, Hungary, Portugal, Slovakia, Spain and Turkey are the six of the 30 allies yet to do so.

U.S. Defense Secretary Austin heads to Germany to meet with allies on Ukraine

US Secretary of Defense Lloyd Austin participates in a virtual Ukraine Defense Contact Group meeting at the Pentagon in washington, DC, on May 23, 2022.

U.S. Defense Secretary Lloyd Austin will travel to Germany this week to host a meeting of the Ukraine Defense Contact Group.

Following the meeting at Ramstein Air Base in Germany, Austin will travel to the Czech Republic, a fellow NATO member state.

“In response to the ever-expanding personal sanctions by the Biden Administration against Russian citizens, a group of persons from members of the U.S. Congress, high-ranking officials, representatives of business and expert communities, as well as cultural figures (25 people), are banned from entry into the Russian Federation on a permanent basis,” the Russian Foreign Ministry wrote, according to an NBC News translation.

Penn and Stiller have been outspoken critics of Russia’s war and have both visited Ukraine since the Kremlin’s military campaign began nearly seven months ago.

A serviceman of pro-Russian militia walks nest to a military convoy of armed forces of the separatist self-proclaimed Luhansk People’s Republic (LNR) on a road in the Luhansk region, Ukraine February 27, 2022.

“This purchase indicates that the Russian military continues to suffer from severe supply shortages in Ukraine, due in part to export controls and sanctions,” the official told NBC News, confirming a New York Times report.

Last week, the Biden administration confirmed that Moscow purchased drones from Iran to use on the battlefield in Ukraine.

The International Atomic Energy Agency, or IAEA, released a report on its findings from a recent mission to the Zaporizhzhia nuclear power plant.

In the 52-page report, IAEA investigators warned that while ongoing shelling “has not yet triggered a nuclear emergency, it continues to represent a constant threat to nuclear safety and security.”

“The IAEA recommends that shelling on site and in its vicinity should be stopped immediately to avoid any further damages to the plant and associated facilities, for the safety of the operating staff and to maintain the physical integrity to support safe and secure operation,” wrote IAEA Director General Rafael Grossi.

The Ukrainian employees working at the site under Russian control were “under unbelievable pressure” and “morale and the emotional state of staff were very low,” according to IAEA investigators.

Investigators described significant damage to buildings at the Zaporizhzhia nuclear power plant and confirmed that Russian military vehicles and equipment were seen stored at the site.

Coinbase, FTX, Binance get inquiries from Congress on crypto scams

Buy Warner Music Group as it will fare better than other streamers during a recession, Goldman says