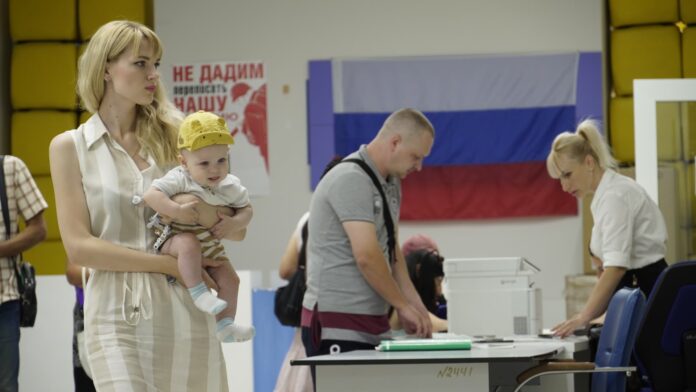 The Ukrainian-elected mayor of the city of Melitopol is urging those in Russian-occupied areas of the country not to partake in the so-called “referendums” being held by Russian authorities.

“We call on the residents of the occupied territories not to participate in the pseudo-referendum in any way,” Ivan Fedorov wrote via Telegram.

“Participation in it is to support the bloody plan to escalate the war against Ukraine, to voluntarily become part of a closed totalitarian society, to assume part of the responsibility for war crimes, to agree to the mobilization of men aged 16-55 to replenish the cannon fodder of the Russian Army, to commit a criminal offense.”

“Don’t open the door to agitators. Do not go to the polling stations. Completely ignore the entire election process. Stay as far as possible from Russian military and enemy equipment. Our heroic armed forces of Ukraine will definitely liberate all occupied territories from racism,” Federov said, adding, “most importantly, participation in a pseudo-referendum is the worst betrayal.”

People arrive to receive Russian passports at a centre in Kherson after Russian President Vladimir Putin signed decree to make it easier for residents of Kherson and Melitopol regions to get passports, in Kherson, Kherson Oblast, Ukraine on July 21, 2022.

“Voting began at 08:00 in the DPR and LPR, as well as in the Kherson region and in the liberated territories of the Zaporozhye region,” state news agency Tass said.

Western and Ukrainian officials have slammed the “referendums” as a sham. Many fear that Russia will rig the votes in its favor and then use the result as justification to annex those territories as Russian and subsequently use nuclear or other unconventional weapons against Ukrainian forces trying to reclaim them.

Speaking in a rare, televised address on Wednesday, Putin warned that if the territorial integrity of Russia is threatened, the Kremlin would “certainly use all the means at our disposal to protect Russia and our people. It is not a bluff.”

Russian President Vladimir Putin’s nuclear threats to the West increase the risk of a nuclear conflict, analysts and campaigners warned.

It comes shortly after Putin called up extra forces for the war in Ukraine and warned that if the territorial integrity of Russia is threatened, the Kremlin would “certainly use all the means at our disposal to protect Russia and our people. It is not a bluff.”

Beatrice Fihn, Nobel laureate and executive director of the International Campaign Against Nuclear Weapons, told CNBC that Putin’s “incredibly dangerous and irresponsible” threats drastically increase the risk of escalation to a nuclear conflict.

President of Ukraine Volodymyr Zelenskyy visits the Kharkiv region for the first time since Russia started the attacks against his country on February 24, in Kharkiv region, Ukraine on May 29, 2022.(Photo by Ukrainian Presidency/Handout/Anadolu Agency via Getty Images)

“I’ll explain what is happening to the Russians in Russian,” Zelenskyy said, speaking Russian in a nightly address on the Telegram messaging app.

“55,000 Russian soldiers died in this war in six months. Tens of thousands are wounded and maimed. Want more? No? Then protest. Fight back. Run away. Or surrender to the Ukrainian forces. These are the options for you to survive,” he added.

Zelenskyy said that Russia’s mobilization of additional troops, the first since World War II, is proof that the Kremlin’s mighty military has faced stiff resistance from Ukrainian forces.

“The Russian leadership is reacting precisely to the fact of Ukrainian strength in changing its tactics and trying to draw even more Russian citizens and resources into the war,” he said.

Lavrov, who arrived late to the meeting and missed remarks by U.S. Secretary of State Antony Blinken and other U.S. allies, accused Kyiv of openly threatening Russia’s security.

“Over the past few years, the Kyiv regime has conducted a frontal assault on the Russian language. It brazenly trampled on the rights of Russian and Russian-speaking people in Ukraine,” Lavrov said.

“Everything I’ve said today simply confirms that the decision to conduct the special military operation was inevitable,” he added, using the Kremlin’s term for its invasion.

Once he was done speaking, he left the U.N. chamber and his deputy Sergey Vershinin remained in position.