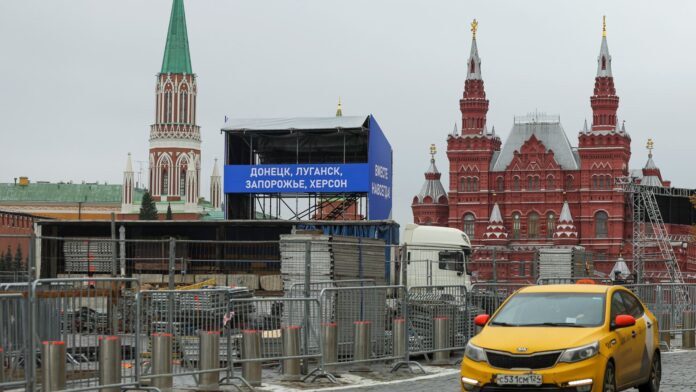 The strikes, which hit a convoy of people who were heading to Russian-occupied territory to pick up their relatives, killed at least 23 people and wounded at least 28, Zaporizhzhia Regional Governor Oleksandr Starukh said in a post on Telegram.

“There are dead and wounded. Rescuers, medics, and all relevant services are currently working at the site,” Starukh wrote.

Ukraine’s Luhansk governor Serhiy Haidai wrote on Telegram, “Near Zaporizhzhia, the Russians fired rockets at a convoy heading to the occupied territory. It should be noted that the departure of 34 vehicles with residents of Luhansk region was planned. More detailed information about the victims is being clarified.”

CNBC has not been able to independently verify the details. Images posted by Starukh and others on social media show disturbing scenes of burnt cars and bodies on the road.

Russian President Vladimir Putin is set to hold a ceremony today officially declaring the annexation of four regions of Ukraine, where sham referendums were held by Russian-appointed authorities over the last week.

The referendum’s results, which have been rejected by much of the international community, showed large majorities of each territory — Donetsk, Luhansk, Kherson and Zaporizhzhia — voting to join the Russian Federation. The regions, making up the country’s eastern and southern flanks, form roughly 15% of Ukraine’s territory.

Government spokesperson Dmitry Peskov said that Putin will sign accession documents at the Kremlin and then deliver a speech. A music concert is also set to take place at Moscow’s Red Square.

Analysts and world leaders worry that Putin’s annexation will make him feel justified in using nuclear weapons to defend the territories from anyone attempting to take them back, as he hinted as much in his speech last week if the “territory of Russia” came under threat.

‘The U.S. does not, and will never, recognize’ Russia’s sham referenda, Blinken says

US Secretary of State Antony Blinken speaks after viewing the “Burma’s Path To Genocide” exhibit at the United States Holocaust Memorial Museum in Washington, DC, March 21, 2022.

Secretary of State Antony Blinken slammed Russia’s “attempt at a land grab in Ukraine” and said that the U.S. will never recognize the results of the Kremlin’s “sham referenda.”

“The results were orchestrated in Moscow and do not reflect the will of the people of Ukraine. The United States does not, and will never, recognize the legitimacy or outcome of these sham referenda or Russia’s purported annexation of Ukrainian territory,” Blinken wrote in a statement.

“This spectacle conducted by Russia’s proxies is illegitimate and violates international law,” he added.

Biden’s top diplomat said that the U.S. will continue to “support Ukraine for as long as it takes.”

The Kremlin has previously said that the results of the referendums held in four regions of Ukraine are legitimate.

‘It can still be stopped,’ Zelenskyy says of Russian attempts to annex parts of Ukraine

“Russia will not get new territory in Ukraine,” Zelenskyy said in Russian in a nightly address on the Telegram messaging app. “It can still be stopped,” he added.

“The price of one person in Russia wanting to continue this war will be that the entire Russian society will be left without a normal economy, without a decent life, and without respect for any human values,” Zelenskyy said, according to an NBC News translation.

“In order to stop this, you have to stop the one in Russia who wants war more than life. Your life, citizens of Russia,” Zelenskyy said without naming Russian President Vladimir Putin.