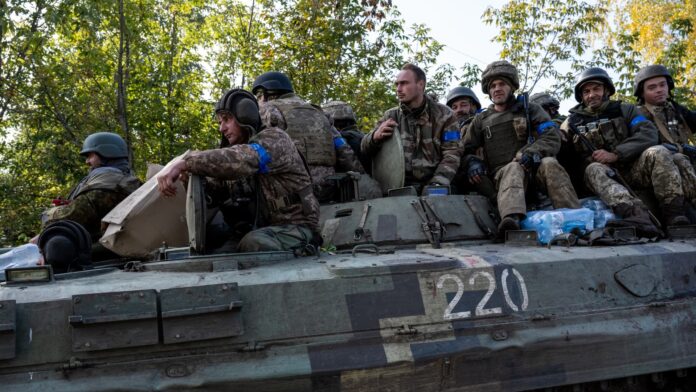 The only way to end the war is on the battlefield, lawmaker says

Ukraine will not negotiate with Russia unless it agrees to withdraw all its troops from Ukrainian territory — but with that increasingly unlikely, the resolution to the conflict currently lies on the battlefield, one Ukrainian lawmaker told CNBC.

“Ukraine is ready for negotiations at any moment, but negotiations about what? About the retreat of Russian troops from our territory? Sure,” Oleksiy Goncharenko, a Ukrainian MP, told CNBC Monday.

“But Putin is not going to do this. He claimed that the territories he invaded are Russian … so clearly he has chosen the way of escalation and that’s why the only answer is on the battlefield and Ukraine is doing this.”

Goncharenko noted that Putin’s partial military mobilization, in which 300,000 men are expected to be called up to fight in Ukraine, would only prolong the war instead of enabling Moscow to win it.

Likening Russia’s army and the state to a dinosaur, he said: “[It has] a massive body, tiny head and very tiny brains inside this head.”

“When Russia will realize [it can’t win] we’re ready to negotiate but it looks like Putin will never do it,” he said.

The “partial military mobilization” announced by President Putin two weeks ago is showing itself to be dysfunctional and disorganized, according to Britain’s Ministry of Defense.

President Putin announced the call-up on Sept. 21, leading to thousands of eligible fighting men trying to flee the country. Other reports have suggested the men going to fight in Ukraine are poorly trained and ill-equipped for war. There have been multiple reports of men being mistakenly conscripted.

Britain’s Ministry of Defense said that even Putin had acknowledged problems with the draft, telling his National Security Council on Sept. 29 that “a lot of questions are being raised during this mobilization campaign, and we must promptly correct our mistakes and not repeat them.”

Reservists drafted during the partial mobilization attend a departure ceremony in Sevastopol, Crimea, on Sept. 27, 2022.

“Putin’s unusually rapid acknowledgement of problems highlights the dysfunction of the mobilisation over its first week. Local officials are likely unclear on the exact scope and legal rationale of the campaign,” the ministry said on Twitter.

“They have almost certainly drafted some personnel who are outside the definitions claimed by Putin and the Ministry of Defence. As drafted reservists continue to assemble at tented transit camps, Russian officials are likely struggling to provide training and in finding officers to lead new units,” the ministry added.

Criticism of Ukraine invasion grows in Russia, even from pro-Kremlin figures

Ukrainian troops pose for a photo in Lyman, Ukraine, in this picture released on social media Oct. 1, 2022.

The Russian defeat in Lyman in northeast Ukraine and other parts of the Kharkiv region, combined with the Kremlin’s failure to conduct a partial military mobilization effectively and fairly, “are fundamentally changing the Russian information space,” according to analysts at the Institute for the Study of War.

“The Russian information space has significantly deviated from the narratives preferred by the Kremlin and the Russian Ministry of Defense that things are generally under control,” analysts at the defense and foreign affairs think tank said Sunday, noting that Ukraine’s recapturing of Lyman in northeast Kharkiv this weekend is leading to mounting criticism of President Putin’s regime, top officials and the so-called “special military operation” (as Russia calls it) in Ukraine.

“Kremlin-sponsored media and Russian milbloggers – a prominent Telegram community composed of Russian war correspondents, former proxy officials, and nationalists – are grieving the loss of Lyman while simultaneously criticizing the bureaucratic failures of the partial mobilization,” the analysts noted in their latest assessment of the war.

Institute for the Study of War

“Kremlin sources and milbloggers are attributing the defeat around Lyman and Kharkiv Oblast to Russian military failures to properly supply and reinforce Russian forces in northern Donbas and complaining about the lack of transparency regarding the progress of war,” they added.

The ISW noted that it’s becoming more common for even the most pro-Kremlin TV shows in Russia to host guests that are critical of how the conflict is progressing and some have even criticized Putin’s decision to annex four Ukrainian regions last Friday “before securing their administrative borders or even the frontline, expressing doubts about Russia’s ability ever to occupy the entirety of these territories.”

“Kremlin propagandists no longer conceal their disappointment in the conduct of the partial mobilization, frequently discussing the illegal mobilization of some men and noting issues such as alcoholism among newly mobilized forces,” the ISW said.

“Some speaking on live television have expressed the concern that mobilization will not generate the force necessary to regain the initiative on the battlefield, given the poor quality of Russian reserves.”

Successes of Ukrainian soldiers not limited to Lyman, Zelenskyy says

“This week, the largest part of the reports is the list of settlements liberated from the enemy within the scope of our ongoing defensive operation. The story of the liberation of Lyman in the Donetsk region has now become the most popular in the media. But the successes of our soldiers are not limited to Lyman,” said Ukraine’s President Volodymyr Zelenskyy.

Ukrainian President Volodymyr Zelenskyy said on Sunday that the success of Ukraine’s soldiers is not limited to the recapture of Lyman in the northeast of the country, with more towns around Kherson being liberated.

“This week, the largest part of the reports is the list of settlements liberated from the enemy within the scope of our ongoing defensive operation. The story of the liberation of Lyman in the Donetsk region has now become the most popular in the media. But the successes of our soldiers are not limited to Lyman,” he said in his nightly address. Ukrainian forces are also liberating the small Arkhanhelske and Myrolyubivka settlements in the Kherson region, he said.

Ukraine is continuing its counteroffensive in the northeast of the country as it tries to reclaim more occupied land from Russia, which last Friday announced it was annexing four regions in Ukraine, a move branded as illegitimate and farcical by the international community.

Over the weekend, Ukraine announced that its forces had fully taken back control of the town of Lyman, which had been used as a key logistics hub by Russian forces, marking another significant win for Kyiv. Russia’s Defense Ministry said that it had withdrawn its forces from the town to prevent them from being encircled.