HomeUSAMan in custody after ex-NY mayor Giuliani 'slapped' on back, police say
USA

Man in custody after ex-NY mayor Giuliani ‘slapped’ on back, police say 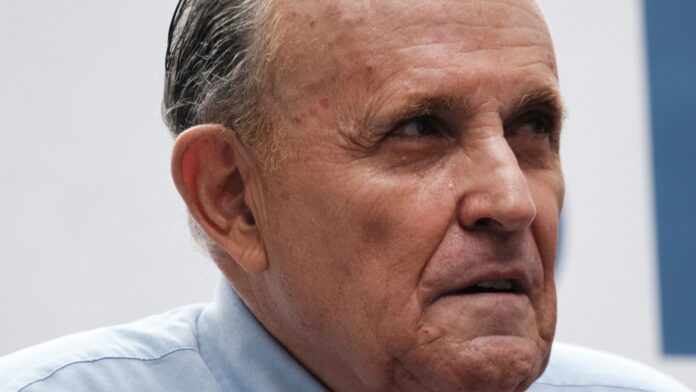 A man was taken into custody Sunday after he was alleged to have slapped former New York Mayor Rudy Giuliani on his back.

A man was taken into custody Sunday after he was alleged to have slapped former New York Mayor Rudy Giuliani on his back, New York City police said.

The man, a 39-year-old employee, is an employee at a ShopRite store in the city’s Staten Island borough, where Giuliani was campaigning for his son, Andrew, who’s vying for the Republican nomination for governor of New York, police said.

Police said the man “approached him and slapped him in the back.”

“We will not be intimidated by left wing attacks,” Andrew Giuliani said in an emailed statement. “As governor I will stand up for law and order so that New Yorkers feel safe again.”

The man was not identified, and police did not say what specific allegations prompted them to detain him.

Store security video published by the New York Post shows someone coming up behind Giuliani inside the retailer and slapping him on the back without much reactive movement by Giuliani.

NBC News has not verified the video.

Giuliani, 78, told the publication the man called him an expletive during the contact.

Giuliani, who worked as an advisor to former President Donald Trump during the time in office when he challenged the results of the 2020 election, did not require medical attention, police said.

In May, Giuliani, a lawyer and former federal prosecutor, met with the congressional committee investigating the Jan. 6 Capitol riots for nine hours.

Grab pares losses by 24%, deliveries unit breaks even ahead of target