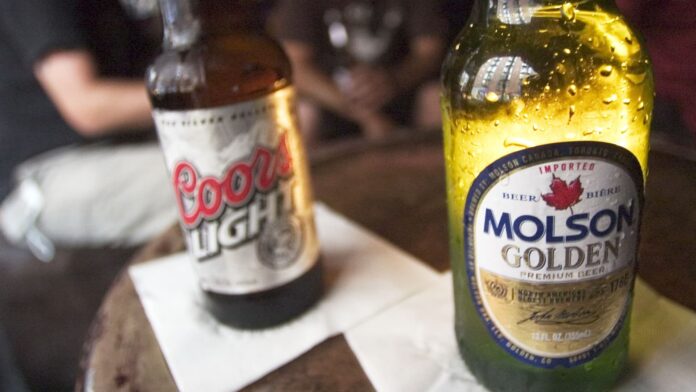 Molson Golden and Coors Light beer bottles are pictured at the Asylum bar in New York.

Molson Coors Beverage will return to the Super Bowl next year, making its first appearance during the big game in more than 30 years.

The move comes after archrival Anheuser-Busch InBev announced in June that it would end a 33-year deal with the NFL that made it the exclusive alcohol advertiser during the Super Bowl. The company still plans to run ads during the game this year.

Since 1989, AB InBev’s NFL deal had shut out other brewers. The Bud Light owner opted to run ads every year except in 2021, when it spent marketing dollars to boost Covid vaccine awareness instead. Its commercials have made Budweiser’s Clydesdale horses iconic, introduced the world to “Whassup?” and even sparked a lawsuit from MillerCoors in 2019.

“The minute we heard that the exclusivity was no longer and we had a chance, we were like ‘Yes, we are in, game on’,” said Michelle St. Jacques, chief marketing officer for Molson Coors.

The company is planning to run just one 30-second spot during the game. But St. Jacques said Molson Coors is aiming to make an unforgettable commercial that breaks through the noise.

The Super Bowl will give the company a national stage to showcase its transformation. Molson Coors has expanded its offerings beyond just beer, adding hard seltzer, whiskey and energy drinks to its portfolio. In 2021, it logged annual sales growth for the first time in more than a decade.

“We’ve changed a lot in the past three years, not only the name of our company, from ‘Brewing’ to ‘Beverage,’ but also the way we’re approaching marketing and building brands in general,” St. Jacques said.

For example, the company has sought to differentiate its two light beers: Miller Lite and Coors Light.

From the sidelines during past Super Bowls, Molson Coors has tried to make a splash. Past marketing campaigns have trolled AB InBev’s brands, like challenging consumers to type the world’s longest URL to burn the one-calorie difference between Miller Lite and Michelob Ultra. For this year’s Super Bowl, Miller Lite opened a bar in the metaverse, spreading the word through social media.

With AB InBev’s monopoly gone, other alcohol companies like Heineken and Diageo, the NFL’s official spirits sponsor, also will have the chance to advertise their drinks on air during the big game.

In 2022, Super Bowl ads went for more than $7 million for a 30-second spot during the game. Advertisers are willing to shell out big bucks for the chance to market their products to the game’s massive audience. The NFL said this year’s championship game had a total of 208 million viewers.

AB InBev isn’t the only beverage giant seeing an end to an exclusive deal with the NFL. PepsiCo announced in May that it will no longer sponsor the game’s halftime show after a decadelong run. A new sponsor hasn’t been announced.

These beaten up stocks could become ‘gift boxes’ for stoic investors

The ‘Merge’ is here — last chance to buy ether before makeover