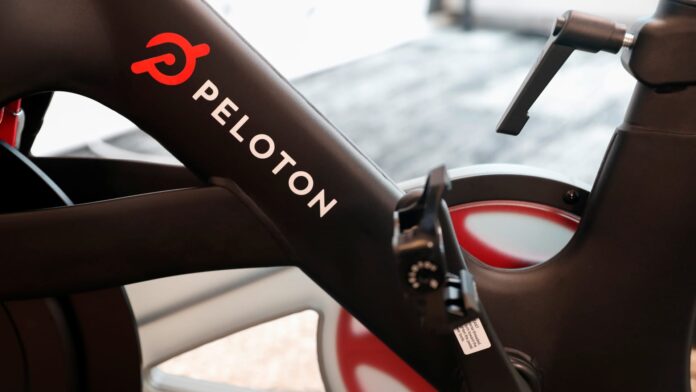 Here are Monday’s biggest calls on Wall Street: JPMorgan reiterates Peloton as overweight JPMorgan said it’s staying positive on shares of Peloton heading into earnings next week. “We remain positive on PTON shares as the company continues to shift its cost structure from fixed to variable with an eye toward turning FCF positive in the back half of FY23.” Bernstein reiterates Apple as market perform Bernstein said that investors should not be concerned about a deceleration in Apple Services growth. “So should investors be worried? In short, no – compares have been extraordinarily difficult, Apple TV+ accounting changes have impacted revenue growth, and Apple has still been growing services at 15% at constant currency.” JPMorgan downgrades Vroom to underweight from neutral JPMorgan said in its downgrade of the digital used vehicle company that it sees a more challenging backdrop. “We are moving to UW from N on both VRM and SFT, as we continue to see a challenging backdrop for the used car industry and prefer companies that have ample liquidity and/or diversity in their business to navigate an uncertain macro backdrop.” Read more about this call here. BMO downgrades Dollar General to market perform from outperform BMO said that recession risks are already priced in. “Despite our belief that DG’ s execution remains strong and our expectation for an acceleration in comps as DG benefits from a more price sensitive environment, we believe this strong outlook is accurately reflected in the shares at this time.” Read more about this call here. BMO upgrades Air Products to outperform from market perform BMO said in its upgrade of the stock that it sees improved execution. “We believe the risk/reward profile for APD has improved significantly in the past few months and as such are upgrading our rating to Outperform.” Baird reiterates Amazon as outperform Baird said that “easing rate fears” should benefit a stock like Amazon’s. “While investors are looking for follow-through over Back-to-School, we note easier growth comps, moderating ad prices, declining shipping/fuel prices, and easing rate fears should benefit AMZN, BABA, CVNA, EBAY, PYPL, SHOP and W.” Citi reiterates Disney as buy Citi raised its price target on Disney to $160 per share from $145 after the company’s strong earnings report last week. “Disney reported F2Q22 revenue and segment EBIT ahead of consensus. In addition, Disney+ subscribers came in above consensus. Along with the print, Disney announced several price increases across its domestic DTC services and pointed to a December 8th launch date for its US ad-supported Disney+ tier. Raymond James downgrades CME Group to market perform from outperform Raymond James said its concerned about interest rate trading volume growth. “However, we are becoming incrementally less optimistic about the outlook for interest rate futures trading volume growth in 2023, and over the last decade the fortunes of CME’ s share price have been highly correlated to the fortunes of its rate futures franchise.” Morgan Stanley downgrades TaskUs to equal weight from overweight Morgan Stanley said in its downgrade of the content moderation company and digital solutions provider that it sees TaskUs shares as rangebound for the foreseeable future. “We are constructive on management’s ability to drive improved growth in the medium-term, and while valuation at these levels remains undemanding, we are mindful of nearterm growth challenges driven by client mix and delivery optimization, likely leaving share rangebound in the coming quarters.” Barclays upgrades Poshmark to overweight from equal weight Barclays said that it likes the company’s gross margin value consistency. “Overall, we favor marketplaces in the current environment and in particular like second hand players POSH and TDUP.” Bank of America reiterates Cummins as buy Bank of America said that Cummins is an “underrated beneficiary of the recent climate bill.” Cummins manufactures engines, filtration, and power generation products. “In our view, 2022 expectations are reasonably set following a solid operational performance in Q2 (i.e, no ‘hockey-stick’ 2H outlook – pricing increases already implemented, costs no longer escalating, China guide reset), US climate bill could be a nice tailwind, and we see some offsetting factors if truck cycle truly rolls in 2023/24. Bank of America downgrades Green Plains to neutral from buy Bank of America downgraded the ethanol fuel producer mainly on valuation. “Meanwhile GRPE continues to extract more corn oil, which is still benefitting from elevated prices that could be sustainable, while biofuels credits in the Inflation Reduction Act should further support demand due to corn oil’s low carbon intensity (CI) score.” JPMorgan upgrades Dillard’s to neutral from underweight JPMorgan said in its upgrade of the department store company that it’s seeing structural improvement. “By our work, several Dept Store bankruptcies & store liquidations (JCP, Stage Stores, Belk, Sears, Goody’s, and Jacobson’s) have increased DDS ‘ customer reach notably in more rural venues.” Atlantic Equities downgrades Comcast and Charter to neutral from overweight Atlantic Equities downgraded several cable stocks on Monday and said it’s concerned about dwindling subscriber growth. “Following much worse than expected broadband results this quarter from both Comcast and Charter, we are downgrading both names to Neutral.” Disclosure: Comcast is the owner of NBCUniversal, parent company of CNBC. Argus downgrades Southwest to hold from buy Argus said in its downgrade of the stock that it’s concerned about cost pressures. “We think that Southwest will be hurt by inflationary pressures and capacity constraints. Although a revenue recovery is underway, we do not expect the shares to move higher until it becomes clear to investors that costs have stabilized.” Bank of America downgrades SolarEdge to neutral from buy Bank of America said in its downgrade of the solar company that it sees no new catalysts for the stock. “We dig in to our SEDG model estimates to better reflect pricing trends, given persistent FX headwind, the current margin opportunity, and mgmt.’s relative focus on the European market.”

Sen. Graham says he was stating the obvious with Trump riots claim