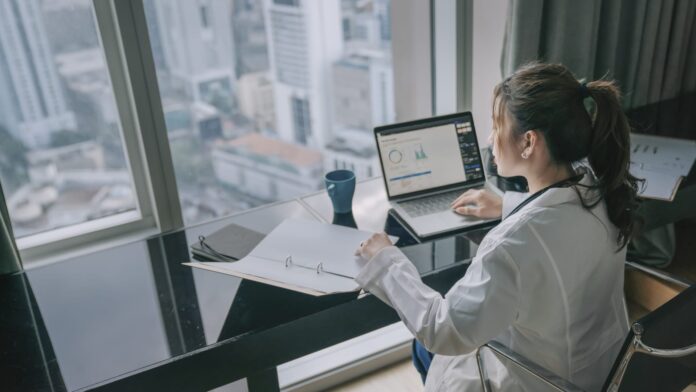 Definitive Healthcare is an attractive buying opportunity as shares could surge roughly 80%, according to Morgan Stanley. Analyst Craig Hettenbach named data and analytics company Definitive Healthcare a top pick, citing its strong business model and attractive entry point as health-care companies deal with longer selling cycles. “We see a compelling risk/reward in the stock, emphasizing an attractive combination of strong growth and profitability. It’s early innings for the adoption of analytics in healthcare and Definitive is off to a strong head start, leveraging its primary data sources and AI engine to greatly enhance the sales efforts of customers,” Hettenbach said in a Tuesday note. “Furthermore, the company is highly profitable, distinguishing itself from other fast growing software companies that have low or negative margins,” he added. Health care has broadly outperformed other sectors as traders pivoted to more defensive sectors this year against a backdrop of increasing market volatility. The sector in the S & P 500 is down about 11% in 2022, compared to a nearly 18% decline in the overall index. But the picture for digital health companies has been more mixed as they contend with macro challenges and longer selling cycles. The analyst pointed out “a downtick through the summer” as a concern. Regardless, the recent drop in Definitive Healthcare’s stock price is an attractive entry point for investors to buy into a strong business model, according to the firm. The company’s stock is about 30% lower year to date and roughly 62% off its 52-week high. Hettenbach has a $34 price target in his base case, implying about 80% upside from where shares ended Friday at $18.84. Shares are up more than 2% in Tuesday trading. “In this challenging macro environment, we view Definitive Healthcare as being in an enviable position to emerge stronger by leveraging its strong head start in data analytics, profitable model (28.7% adjusted EBITDA margin and 87.9% adjusted GM in 2022E), solid balance sheet (~$225mn in cash) and FCF generation ($64mn in 2022E) to further extend its lead through organic investment and M & A,” the note read. —CNBC’s Michael Bloom contributed to this report.

Not all cheap stocks are always value traps, UBS says.