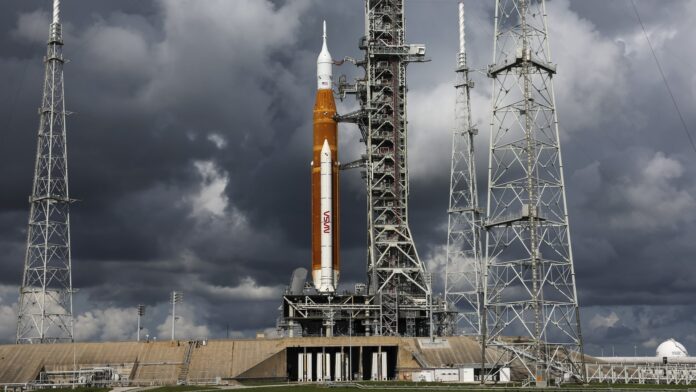 NASA’s Artemis I rocket sits on launch pad 39-B at Kennedy Space Center on September 02, 2022 in Cape Canaveral, Florida.

NASA said Thursday that it is working to fix the issues that delayed the launch of its Artemis I moon rocket last week, and that it hopes to make another attempt later this month.

The space agency on Sept. 3 called off the second attempt to launch the mission after detecting a hydrogen leak as the Space Launch System (SLS) rocket was being fueled. The Artemis I mission represents the debut of the SLS rocket and the uncrewed Orion capsule it is carrying, for what is expected to be a more than month-long journey around the moon.

NASA made several unsuccessful attempts during the launch countdown on Saturday to fix the leak.

During a press conference on Thursday, NASA officials said work at the launchpad is ongoing, with the agency’s team aiming to complete the replacement of seals on the fueling system by the end of the day. NASA then hopes to conduct a tanking demonstration on Sept. 17 to verify the replacement work was successful.

Assuming the work and testing are completed by then, NASA has requested new launch dates from the U.S. Space Force’s Eastern Range – which reviews and approves all missions that liftoff from Cape Canaveral region. The agency has asked to make launch attempts on Sept. 23 and Sept. 27.

NASA’s associate administrator, Jim Free, noted that crucial to those requests is whether the Space Force will sign off on extending the requirements previously set around the batteries for the rocket’s flight termination system, needed in in the event of a problem mid-launch.

NASA needs a waiver from the Eastern Range to move forward with an attempt on either of those launch dates. Without the waiver or completion of the hydrogen leak work, NASA faces the Artemis I mission delaying to October.

Economy flights from Moscow to Dubai hitting $5,000 as Russians flee

Here’s how Elon Musk can prevent racist raids on Twitter