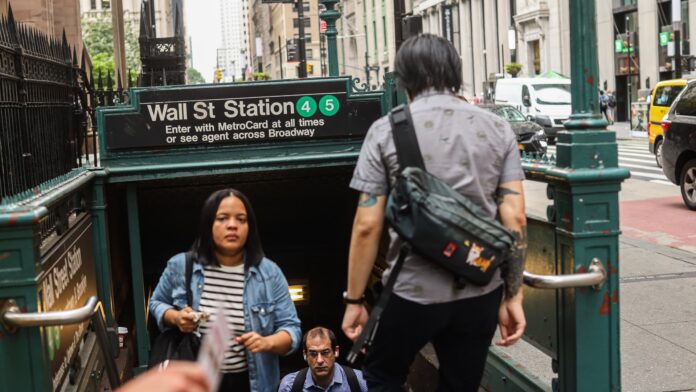 Check out the companies making headlines before the bell:

Newmont (NEM) – The mining company’s stock slid 3.3% in premarket trading after it reported lower-than-expected second-quarter earnings. Profit was down nearly 41% from a year ago, hurt by a drop in gold prices.

Squarespace (SQSP) – The e-commerce platform provider tumbled 14.4% in the premarket after its full-year revenue guidance fell short of Street forecasts. Squarespace reported better-than-expected results for its latest quarter but said revenue is taking a hit from currency headwinds.

JD.com (JD) – Morgan Stanley calls the Chinese e-commerce company a “catalyst driven idea”, helping its stock rise 2% in premarket trading. The firm thinks the catalyst could be better than expected revenue growth guidance when JD.com next reports earnings in August.

Ryanair (RYAAY) – Ryanair jumped 5.7% in the premarket after the airline reported better-than-expected quarterly results. Ryanair cautioned that a return to pre-Covid levels of profitability this year was not certain.

Farfetch (FTCH) – Farfetch shares gained 2.5% in premarket trading following reports that the online luxury fashion seller was close to a deal with Switzerland’s Richemont that would see it absorb Richemont-owned fashion retailer YNAP.

Uber Technologies (UBER) – The ride-hailing company admitted to not reporting a 2016 data breach that impacted 57 million drivers and passengers as part of a settlement agreement to avoid criminal prosecution. Uber added 1% in premarket trading.

Biden speaks about the state of the U.S. economy

Nokia is ‘right to buy’