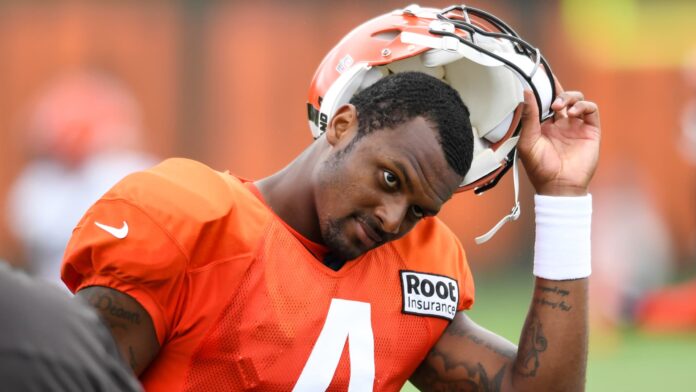 The NFL and NFL Players Association settled on an 11-game suspension and a $5 million fine for Cleveland Browns quarterback Deshaun Watson, the league announced on Thursday.

Watson, who also agreed to the settlement, initially received a six-game suspension for alleged misconduct, but, according to NBC Sports, NFL Commissioner Roger Goodell pushed for a full-season suspension and the fine because of Watson’s “predatory behavior.”

Watson, who was traded to Cleveland in March, had 24 lawsuits filed against him from women alleging sexual harassment during massage treatments. He settled 23 of these suits. He previously signed a fully guaranteed $230 million, five-year contract.

“I apologize once again for any pain this situation has caused. I take accountability for the decisions I made,” Watson said in a statement Thursday. “My focus going forward is on working to become the best version of myself on and off the field and supporting my teammates however possible while I’m away from the team.”

The decision concludes the appeal process, and the league says there will be no additional legal steps. Watson will be eligible for reinstatement on Nov. 28. The 17-game NFL season begins Sept. 8.

“Deshaun has committed to doing the hard work on himself that is necessary for his return to the NFL,” Goodell stated. “This settlement requires compliance with a professional evaluation and treatment plan, a significant fine, and a more substantial suspension. We are grateful to Judge Robinson and Peter Harvey for their efforts in addressing these matters, which laid the foundation for reaching this conclusion.”

Watson’s $5 million fine will combine with $1 million each from the NFL and the Browns to create a fund to support the work of nonprofits that educate young people on healthy relationships, promote education and prevention of sexual misconduct and assault.

“Now that a decision on discipline has been reached, we understand this is a real opportunity to create meaningful change,” read a statement from Browns owners Dee and Jimmy Haslam. “Since Deshaun entered our building, he has been an outstanding member of our organization and shown a true dedication to working on himself both on and off the field. We will continue to support him as he focuses on earning the trust of our community.”

The NFLPA did not immediately respond to a request for comment.

Amazon to shut down Kindle store in China