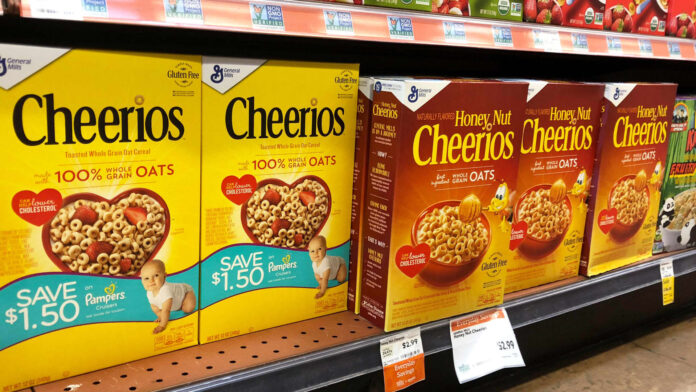 As the bear market continues to rage on, one boring stock has quietly hit an all-time high. On Tuesday, shares of General Mills reached $76.09, a new intraday high since the food company started publicly trading in 1928. Investors have been positive on the food company, which has gained more than 10% this year while the major averages dropped into bear market territory over the same time period. The pop in the stock came quickly after the open, but General Mills shares were recently down nearly 2% in trading. The Dow Jones Industrial Average last dropped about 500 points , or about 1.7%, as recession concerns loomed over traders. The maker of Cheerios and Annie’s recently impressed Wall Street with an earnings beat that proved it can raise prices to cover rising costs, without hurting sales of its cereals, yogurts and other pantry staples. During its earnings call, General Mills CEO Jeffrey Harmening said more consumers are switching to at-home eating, instead of dining out at restaurants, to save money as food prices continue to rise. “Right now, the consumer is in a decent place and we haven’t really seen any elasticity change,” Harmening said. “And I think that’s because of the shift from away-from-home to at-home eating.” Consumer demand for packaged food should remain strong despite historically high rates of inflation, according to a note last month from Bank of America. Household budgets are being stretched by higher food costs, gasoline prices and rents. The firm said companies such as General Mills remain “relatively resilient” as volumes across packaged foods remain elevated. Last week, General Mills said it approved a 6% increase to its dividend, which is appealing to investors who are looking to generate income amid greater market volatility. In August, the food manufacturer will pay out a quarterly dividend of 54 cents per share, up from 51 cents the prior quarter. This puts the stock’s dividend yield at 2.9%, according to FactSet.

Cruise gets green light for commercial robotaxis in San Francisco