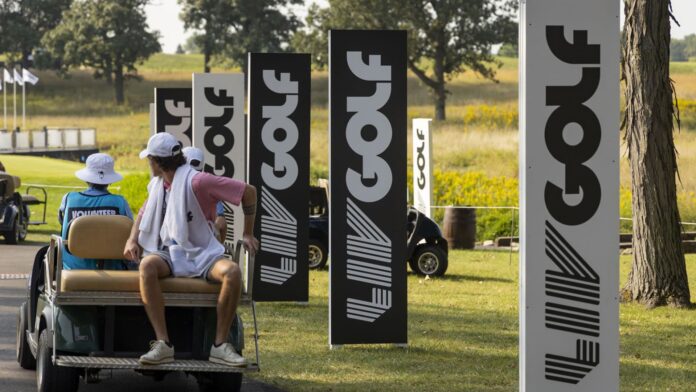 Signs are posted at the LIV golf tournament on Thursday, Sept. 15, 2022, at Rich Harvest Farms in Sugar Grove, Illinois.

The PGA Tour filed a countersuit against LIV Golf late Wednesday, alleging that the Saudi-backed upstart league is guilty of anti-competitive practices.

The suit is the latest volley in the battle between the legacy PGA Tour and upstart LIV, which is backed by Saudi Arabia’s deep-pocketed Private Investment Fund and has been aggressive in wooing talent.

The PGA Tour upped its prizes and player benefits in August, widely seen as an attempt to match LIV’s enticing contracts. The tour also secured loyalty agreements from its top players, as fears of poaching remain.

Both leagues have claimed that the other’s player contracts and policies limit restrict golf talent and prevent proper competition.

“LIV has signed golfers to multi-year contracts containing obligations that are far more restrictive than anything in the [PGA Tour] Regulations, including a prohibition on participation in conflicting events that, unlike the TOUR’s conflicting event rules, does not allow for any request for release,” the PGA Tour said in its filing Wednesday.

The PGA Tour declined to comment on its countersuit.

LIV Golf, Phil Mickelson and other players filed a suit against the tour when LIV-affiliated players were suspended from tour events. Mickelson and three others dropped out of the suit Tuesday, but LIV Golf remains a plaintiff in the case.

“The Tour has made these counterclaims in a transparent effort to divert attention from their anti-competitive conduct, which LIV and the players detail in their 104-page complaint,” said Jonathan Grella, LIV Golf’s top spokesperson. “We remain confident that the courts and the justice system will right these wrongs.”

The Justice Department began probing the PGA Tour in July in search of possible anti-competitive behavior.

LIV Golf still lacks a U.S. media partner and has streamed this year’s tournaments on its website and YouTube instead airing them on linear on TV. Reports have said that Amazon and Apple turned down a streaming rights deal with the league.

Most recently, Golfweek reported that LIV Golf was planning to pay Fox Sports to broadcast its 2023 season. Typically, channels pay leagues for the right to air competitions, not the other way around.

“Recent reports about media rights have been incomplete and inaccurate,” Grella told CNBC in response to the Golfweek report. “LIV Golf is just beginning its process and is in active discussions with several companies about broadcasting the LIV Golf League. We caution that no one should draw any conclusions about potential media rights given that we are still in the middle of negotiations with several outlets.”

Share
Facebook
Twitter
Pinterest
WhatsApp
Previous article
Bank of America downgrades Apple, says weak consumer will cause stock’s outperformance to end
Next article
How to turn off the always-on display on the iPhone 14 Pro or Pro Max
RELATED ARTICLES
Business