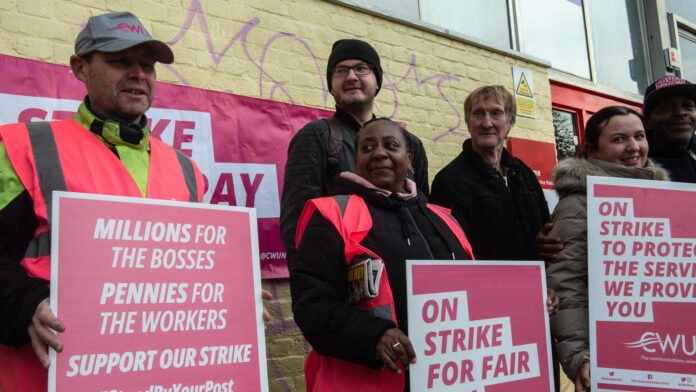 LONDON – Strikers from the CWU Trade Union attend the picket line at Peckham Royal Mail centre on November 24, 2022 in London, England. Strikes planned for the Black Friday weekend and the run-up to Christmas will go ahead after talks between Royal Mail and the Communication Workers Union ended without agreement.

LONDON — Thousands of postal workers in the U.K. are on a two-day strike, disrupting Black Friday after talks between Royal Mail and the Communication Workers Union fell through.

However, Royal Mail Group — recently renamed International Distributions Services on the London Stock Exchange — said in a statement Wednesday that it had tabled its “best and final offer” and accused the union of “holding Christmas to ransom.”

The CWU has announced 10 further days of strike action up until Christmas Eve, of which four have been formally notified, with the last falling on Dec. 1.

In October, Royal Mail revealed plans to cut up to 10,000 jobs by next summer and posted a half-year adjusted operating loss of £219 million ($265.3 million), and CEO Simon Thompson said the strikes had already added £100 million to the company’s losses so far this year. IDS shares have fallen more than 58% since the start of the year.

“In a materially loss-making company, with every additional day of strike action we are facing the difficult choice of whether we spend our money on pay and protecting jobs, or on the cost of strikes,” Thompson said Wednesday.

“The CWU’s planned strike action is holding Christmas to ransom for our customers, businesses and families across the country, and is putting their own members’ jobs at risk.”

The union on Wednesday said it met with Royal Mail executives, but claimed Thompson did not attend. In a statement, the CWU warned of “the end of Royal Mail as we know it.”

Royal Mail claims its latest offer includes an enhanced pay deal of up to 9% over 18 months, a new profit share program for employees, a block on compulsory redundancies until the end of March 2023 and an improvement to voluntary redundancy packages.

It also said the deal on the table included cuts to sick pay, removal of a Sunday premium payment, later start and finishing times and the “introduction of technology that will monitor postal workers every minute of the day.”

BIRMINGHAM, U.K. – November 24, 2022: Postal workers on the picket line at the Central Delivery Office and Mail Centre in Birmingham. Members of the Communication Workers Union (CWU) are holding a 48-hour strike in a long-running dispute over jobs, pay and conditions.

“We will not accept that 115,000 Royal Mail workers — the people who kept us connected during the pandemic, and made millions in profit for bosses and shareholders — take such a devastating blow to their livelihoods,” said CWU General Secretary Dave Ward.

“These proposals spell the end of Royal Mail as we know it, and its degradation from a national institution into an unreliable, Uber-style gig economy company.”

Postal workers in August voted overwhelmingly in favor of strike action in protest at pay and conditions, after Royal Mail initially imposed a 2% pay increase on workers while U.K. inflation was heading toward double digits. U.K. inflation hit 11.1% in October.

The union is calling for an improved 18-month pay deal, a guarantee of no compulsory redundancies and an “alternative business strategy that would see Royal Mail Group use its competitive advantage to grow as a company, instead of becoming a gig economy parcel employer.”

Workers across the public and private sectors are striking in the U.K. over pay, working conditions and pensions, with inflation running at its highest level for over 40 years and the independent Office for Budget Responsibility (OBR) last week projecting the steepest fall in living standards since records began.

The Office for National Statistics (ONS) estimated that an average of 19,500 working days per month were lost to industrial action in 2019, but this has risen since the Covid-19 pandemic, and hit 87,600 in July 2022.

Rail strikes have brought the country’s train services to a virtual standstill on multiple days throughout the year, and the RMT union, whose members work for Network Rail and 14 other train operators, recently voted in favor of four more 48-hour rail strikes in the run-up to Christmas.

The Royal College of Nursing recently announced that its members will stage walkouts by the end of the year for the first time in its 106-year history.

The British Medical Association will hold a ballot in January for junior doctors in England over a pay deal that would offer them a 2% increase this year, while 18,000 ambulance workers represented by the sizeable GMB and Unite unions are currently voting on strike action.

Scottish teachers held industrial action on Thursday which closed the vast majority of schools in Scotland, also demanding a 10% pay rise, and several U.K.-wide teachers’ unions representing a total of more than 400,000 teachers and support staff are holding ballots which close in January.

Telecoms workers staged strike action for the first time in more than 30 years in July in protest over pay, along with additional dates in August and October, while airline baggage handlers walked out for three days on Nov. 18.

Around 100,000 civil servants, including Border Force officials, also recently voted to strike over the Christmas period, demanding a 10% pay increase.