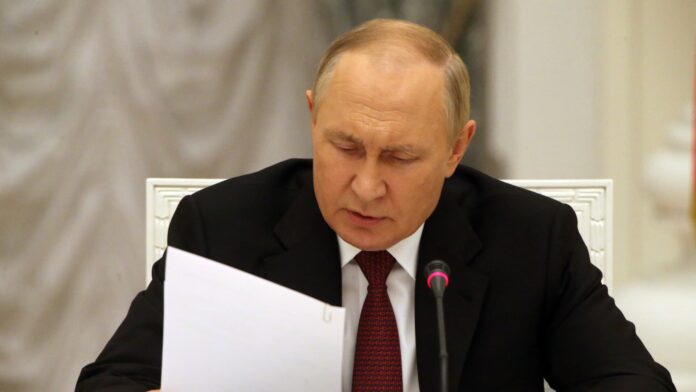 Russian President Vladimir Putin speaks during a meeting on the military-industrial complex at the Kremlin, September 20, 2022, in Moscow, Russia.

“There are four new regions of Russia,” Putin said from the Kremlin in Moscow, according to a translation.

“The results are known, well known,” Putin said, referring to the series of annexations that the West described as a sham. He claimed the results were due to the will of millions of people, saying they had the right to self-determination.

These include two self-proclaimed, pro-Russian “republics” in Luhansk and Donetsk in the east, and in Kherson and Zaporizhzhia in the south.

Unsurprisingly, the votes, seen as illegitimate, illegal and rigged by Ukraine and its allies, saw a majority of people vote to join Russia.

Ukraine said the referendums were carried out “under the barrel of a gun” and called on its international allies to immediately ramp up severe sanctions on Russia in order to deter it from annexing more territory as it did with Crimea in 2014.

Moscow, for its part, has warned it has “the right” to use nuclear weapons to defend its territory and citizens if it feels there is an existential threat, or even if it’s attacked by conventional weapons.

This has raised concerns that it could resort to using nuclear weapons against Ukraine now that more regions are annexed and Moscow can claim them, however falsely, as their own. One Ukrainian defense ministry official told CNBC this week that Kyiv understands the threat of such an attack is “real.”

It is thought Moscow’s latest move is likely to escalate and prolong the war even further, making it more complex to reach a peaceful resolution.

Changes to Russia’s constitution made in 2020, under Putin, mean that it is illegal for Russia to give away any part of its territory to a foreign power, meaning it is unlikely to ever willingly cede territory back to Ukraine.

All the signs point to Putin deciding to up the ante in the war, having ramped up the nuclear rhetoric and ordered a military mobilization that has seen 300,000 reservists called up, with many trying to flee the draft, to be sent to fight in Ukraine with poor training and little equipment.

Western nations have vowed to keep supporting Ukraine, repeating the mantra that they will do so “whatever it takes,” but there are fears that should the war continue for months, and years, ahead that support could wane; there are already concerns that the U.S. and Europe are running out of weapons to send Ukraine, which is largely reliant on NATO arms to keep fighting the war.

Meanwhile, Western citizens are coping with the fallout of the war in the form of higher energy and food prices, and could start to pressure their own governments to rebuild relations with giant energy and wheat exporter Moscow to ease these pressures.

Putin has “opened a conflict that is shifting international politics, roiling the global economy, remaking relations between East and West … as well as the West and Global South … for years, perhaps decades, to come,” Eurasia Group President Ian Bremmer said in a speech Wednesday.

“This still-expanding conflict was, and continues to be, the design of one man, but its effects have upended lives and livelihoods in every region of our still-very-much interconnected world.”

Stocks like Kontoor Brands and Pfizer have huge upside into earnings