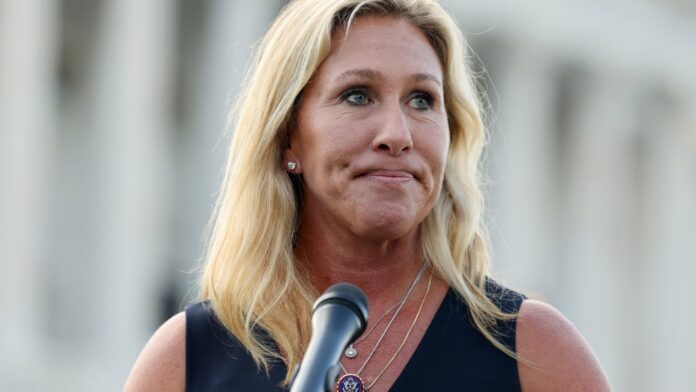 Representative Marjorie Taylor Greene (R-GA) holds a press conference outside the U.S. Capitol following a private visit to the Holocaust Museum, to express contrition for previous remarks about Jewish people, in Washington, June 14, 2021.

Two officers showed up to Greene’s home in Rome, Georgia, after receiving a call at 2:53 a.m. ET Thursday about “a male possibly shooting his family members and then himself,” according to a report from the Rome Police Department.

The suspect, who called through an internet chat that appeared to be a suicide crisis line, falsely told police responders that a man “came out as trans-gender and claimed they shot the family” at Greene’s address, the report said.

“If anyone tried to stop me from shooting myself, I will shoot them,” said the caller, who gave officers the name Wayne Greene and warned that “they would be waiting for us,” according to the police report.

The officers went to Greene’s house and met her at her front door, where they explained the situation, the report said. They “confirmed this was a second false report,” the department said in a press statement.

Officers could not see a location used in the suicide chat line “due to the person(s) using a VPN,” the report said.

The department said it is working with the U.S. Capitol Police on the investigation, which remains active.

Greene revealed in a tweet Thursday morning that she was “swatted again last night.”

Her spokesman, Nick Dyer, told CNBC he could confirm the incident. “Our number one concern is the safety of Congresswoman Greene and her family,” read a statement from Greene’s office, which described the calls as “violent crimes” even though no violence occurred.

The far-right lawmaker, who is supported by former President Donald Trump, was targeted in the first swatting call around 1 a.m. ET on Wednesday by an alleged opponent of her stance on transgender rights, police said.

That caller falsely claimed that a man had been shot multiple times in a bathtub at Greene’s residence.

Afterward, the department received a second call from that suspect, who was using a computer-generated voice as they claimed responsibility for the incident.

Greene had introduced a bill in Congress last week that would make it a felony to provide gender-affirming care to transgender minors.

The legislation came amid a growing right-wing movement against those treatments that recently targeted Boston Children’s Hospital, which said last week that it is dealing with an influx of hostile calls and emails, including threats of violence.

Greene later Thursday morning railed against media outlets that have criticized her politics on transgender issues.

“Those media companies, they’re responsible for trying to get me killed by those horrific headlines,” she said in an interview with Steve Bannon, a right-wing media host and former top Trump advisor. “The disgusting left, MSNBCs and the NBCs, putting headlines up there that I’m targeting trans kids, that is the biggest lie, and I should sue them for saying such things,” Greene said.

Disclosure: NBC, MSNBC and CNBC are divisions of NBCUniversal.