HomeInvestingSell Bed Bath & Beyond as it’s trading at ‘unrealistic valuations,’ B....
Investing

Sell Bed Bath & Beyond as it’s trading at ‘unrealistic valuations,’ B. Riley says in downgrade 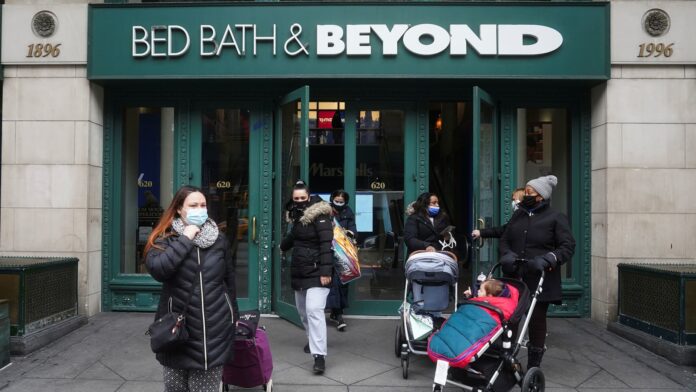 Investors should sell Bed Bath & Beyond as the meme stock favorite is trading at “unrealistic valuations,” according to B. Riley. The firm said shares could crater more than 65% from here. Analyst Susan Anderson downgraded shares of Bed Bath & Beyond to sell from neutral, citing the stock’s unbelievable rise this quarter even as the retailer struggles to reverse declining sales. “We have seen the stock increase more than 3x since BBBY reported a very weak 1Q leading to the ousting of CEO at the time Mark Tritton. BBBY has recently gained the attention of retail traders in the Wall Street Bets Reddit forum again, which gained notoriety during the Gamestop saga back in January 2021. We believe that BBBY is currently trading at unrealistic valuations,” Anderson wrote in a Tuesday note. Shares of Bed Bath & Beyond are up roughly 222% this quarter, while remaining 47% off their 52-week high, in the latest meme stock craze. Traders on Reddit’s messaging board WallStreetBets are driving up the stock in an attempt to squeeze short sellers. Still, the analyst noted that the recent stock levels could “potentially provide BBBY a long-term lifeline” as the retailer attempts to turn its business around. “Prior ‘meme stocks’ including GME and AMC have used their prior boosts to raise capital through an at-the-market (ATM) offering to help generate cash,” Anderson wrote. Regardless, the analyst reiterated a $5 price target, implying roughly 69% downside from Monday’s closing price of $16. Shares declined 4% in Tuesday premarket trading. —CNBC’s Michael Bloom contributed to this report.

Is North Korea open to travelers? No, but it may also depend on China