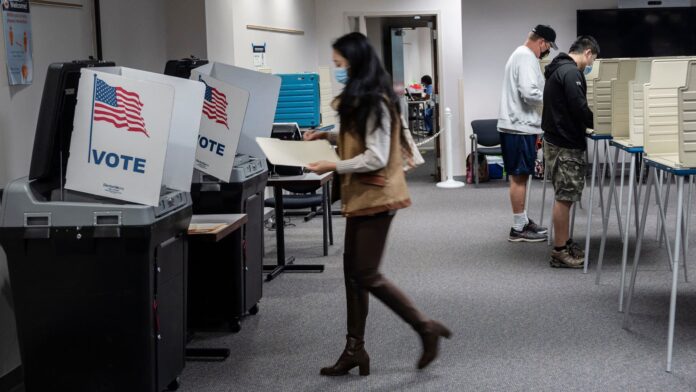 The companies now regularly come under close scrutiny around election time, something that accelerated following findings that Russian agents used social media to sow division in the run-up to the 2016 election. During the last presidential election in 2020, the platforms faced the challenge of moderating election denialism as an outgoing president stoked the false claims himself, leading several of them to at least temporarily suspend him after the Jan. 6 insurrection.

This year, the platforms are using all of those experiences to prepare for threats to democracy and safety as voters decide who will represent them in Congress, governor’s offices and state legislatures.

Here’s how all the major platforms are planning to police their services on Election Day.

Meta’s Facebook has been one of the most scrutinized platforms when it comes to misinformation. In response to years of criticism, it has bolstered its approach to election integrity. It’s said it will use many of the same policies and safeguards this year that it had in 2020.

Meta has stood up its Elections Operations Center, which it likened to a command center, to bring together different teams throughout the company to monitor and quickly address threats they see on the platform. It’s used this model dozens of times worldwide since 2018.

Facebook and Instagram also share reliable information with users about how to vote (including in languages other than English). The company said it’s already sent more than 80 million election notifications this year on the two platforms.

The company uses third-party fact-checkers to help label false posts so they can be demoted in the algorithm before they go viral. Meta said it’s investing an additional $5 million in fact-checking and media literacy efforts before Election Day.

Meta said it’s prepared to seek out threats and coordinated harassment against election officials and poll workers, who were the subject of misinformation campaigns and threats during the last election.

Meta has pledged to remove posts that seek to suppress voting, like misinformation about how and when to vote. It also said it would reject ads that discourage voting or question the legitimacy of the upcoming election.

In a study by New York University’s Cybersecurity for Democracy and international NGO Global Witness testing election integrity ad screens across social media platforms, the groups found Facebook was mostly successful in blocking ads they submitted with election disinformation. Still, 20% to 50% of the ads tested were approved, depending on what language they were in and whether they were submitted from inside or outside the U.S.

The researchers did not run the ads once they were approved, so it’s not clear whether Facebook would have blocked them during that step.

A Meta spokesperson said in a statement published with the study that it was “based on a very small sample of ads, and are not representative given the number of political ads we review daily across the world.”

“We invest significant resources to protect elections, from our industry-leading transparency efforts to our enforcement of strict protocols on ads about social issues, elections, or politics – and we will continue to do so,” a Meta spokesperson said in a separate statement to CNBC.

TikTok owner ByteDance has launched a women’s fashion website called If Yooou. Pinduoduo launched an e-commerce site in the U.S. called Temu. The two companies are the latest Chinese tech giants to look to crack the international e-commerce market domianted by Amazon.

TikTok has become an increasingly important platform for all sorts of discussion, but it’s tried to keep its service at arm’s length from the most heated political discussions.

TikTok does not allow political ads and has stated its desire for the service to be “a fun, positive and joyful experience.”

“TikTok is first and foremost an entertainment platform,” the company said in a September blog post. It added that it wants to “foster and promote a positive environment that brings people together, not divide them.”

Still, the NYU and Global Witness study found TikTok performed the worst out of the platforms it tested in blocking election-related misinformation in ads. Only one ad it submitted in both English and Spanish falsely claiming Covid vaccines were required to vote was rejected, while ads promoting the wrong date for the election or encouraging voters to vote twice were approved.

TikTok did not provide a comment on the report but told the researchers in a statement that it values “feedback from NGOs, academics, and other experts which helps us continually strengthen our processes and policies.”

The service said that while it doesn’t “proactively encourage politicians or political parties to join TikTok,” it welcomes them to do so. The company announced in September that it would try out mandatory verification for government, politician and political party accounts in the U.S. through the midterms and disable those types of accounts from running ads.

TikTok said it would allow those accounts to run ads in limited circumstances, like public health and safety campaigns, but that they’d have to work with a TikTok representative to do so.

TikTok also barred these accounts from other ways to make money on the platform, like through tipping and e-commerce. Politician and political party accounts are also not allowed to solicit campaign donations on their pages.

TikTok has said it’s committed to stemming the spread of misinformation, including by working with experts to strengthen its policies and outside fact-checkers to verify election-related posts.

It’s also sought to build on its experiences from the last election, like by surfacing its election center with information about how to vote earlier in the cycle. It’s also tried to do more to educate creators on the platform about what kinds of paid partnerships are and are not allowed and how to disclose them.

A video grab taken from a video posted on the Twitter account of billionaire Tesla chief Elon Musk on October 26, 2022 shows himself carrying a sink as he enters the Twitter headquarters in San Francisco. Elon Musk changed his Twitter profile to “Chief Twit” and posted video of himself walking into the social network’s California headquarters carrying a sink, days before his contentious takeover of the company must be finalized.

Twitter is in a unique position this Election Day, after billionaire Elon Musk bought the platform and took it private less than a couple weeks before voters headed to the polls.

Musk has expressed a desire to loosen Twitter’s content moderation policies. He’s said decisions on whether to reinstate banned users, a group that includes former President Donald Trump, would take a few weeks at least.

But shortly after the deal, Bloomberg reported the team responsible for content moderation lost access to some of their tools. Twitter’s head of safety and integrity, Yoel Roth, characterized that move as a normal measure for a recently acquired company to take and said Twitter’s rules were still being enforced at scale.

But the timing shortly before the election is particularly stark. Musk said teams would have access to all the necessary tools by the end of the week before the election, according to a civil society group leader who was on a call with Musk earlier in the week.

Before Musk’s takeover, Twitter laid out its election integrity plans in an August blog post. Those included activating its civic integrity policy, which allows it to label and demote misleading information about the election, sharing “prebunks,” or proactively debunked false claims about the election, and surfacing relevant news and voting information in a dedicated tab. Twitter has not allowed political ads since 2019.

People walk past a billboard advertisement for YouTube on September 27, 2019 in Berlin, Germany.

Google and its video platform YouTube are also important platforms outside of Facebook where advertisers seek to get their campaign messages out.

The platforms require advertisers running election messages to become verified and disclose the ad’s backing. Political ads, including information on how much money was behind them and how much they were viewed, are included in the company’s transparency report.

Prior to the last election, Google made it so users could no longer be targeted quite as narrowly with political ads, limiting targeting to certain general demographic categories.

The NYU and Global Witness study found YouTube performed the best out of the platforms it tested in blocking ads with election misinformation. The site ultimately blocked all the misinformation-packed ads the researchers submitted through an account that hadn’t gone through its advertiser verification process. The platform also blocked the YouTube channel hosting the ads, though a Google Ads account remained active.

Like other platforms, Google and YouTube highlight authoritative sources and information on the election high up in related searches. The company said it would remove content violating its policies by misleading about the voting process or encouraging interference with the democratic process.

YouTube also has sought to help users learn how to spot manipulative messages on their own using education content.

How airlines plan to end one billion tons of carbon emissions