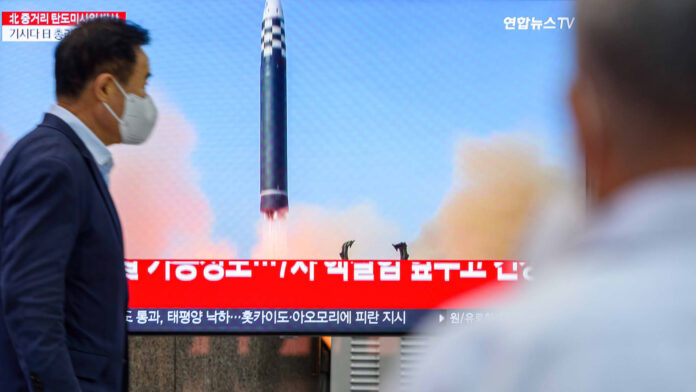 A TV screen showing a news program reporting about North Korea’s missile launch with file footage, is seen at a railway station in Seoul. North Korea fired a mid-range ballistic missile on October 4, which flew over Japan, Seoul and Tokyo.

South Korea and the U.S. military fired a volley of missiles into the sea in response to North Korea’s launch of a ballistic missile over Japan, Seoul said on Wednesday, as Pyongyang’s longest-range test yet drew international condemnation.

Nuclear-armed North Korea test-fired an intermediate-range ballistic missile farther than ever before on Tuesday, sending it soaring over Japan for the first time in five years and prompting a warning for residents there to take cover.

South Korean and American troops staged a missile drill of their own in response, South Korea’s Joint Chiefs of Staff said on Wednesday.

Each side fired a pair of U.S.-made ATACMS short-range ballistic missiles, according to a statement.

The military separately confirmed that a South Korean Hyunmoo-2 missile failed shortly after launch and crashed, but caused no casualties.

People aren’t cutting back on tips even as inflation surges