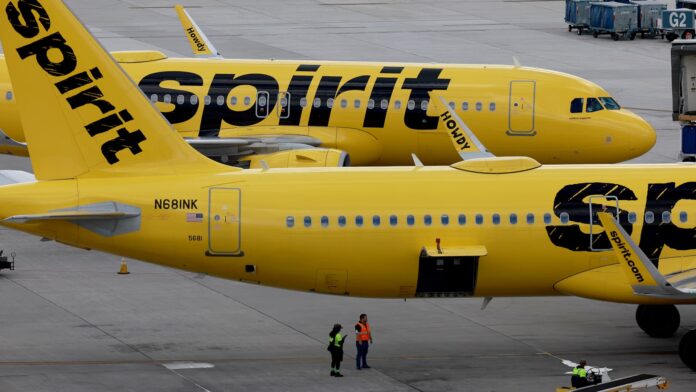 Spirit reported results less than two weeks after it announced it agreed to sell itself to JetBlue Airways for $3.8 billion, ending a months-long bidding war for Spirit between JetBlue and Frontier Airlines.

Passengers were paying more to fly, however, with revenue per passenger, per flight up more than 24% from 2019 to $140.61, including fees. Spirit, like other discount carriers, offers travelers low fares and charges fees for add-ons like cabin baggage and seat selection.

In the current quarter, Spirit expects pre-tax margins between negative 1% and positive 1%, citing capacity constraints in Florida. The Federal Aviation Administration this spring said it would add more air traffic controllers to handle a surge in volume in the state.

Spirit, JetBlue and other major carriers have already dialed back their growth plans in an effort to avoid flight disruptions, which were made worse this year by staffing shortages.

Still, Spirit said it expanded flying almost 10% in the second quarter compared with the same period of 2019. It plans to grow its schedule by 14% in the third quarter and 25% in the last three months of the year, compared with three years earlier.

The airline’s executives will face questions about how it will manage costs and travel demand for the rest of the year on a call with analysts scheduled for Wednesday at 8:30 a.m.

Higher costs have hit other carriers as well, including JetBlue, which reported a second-quarter loss last week.

Low-cost and leisure-focused carrier Sun Country on Monday posted a $3.9 million loss despite a nearly 30% jump in revenue compared with 2019. And Mesa Air Group, a regional airline that flies for United and other carriers, posted a $10 million loss for the last quarter, due to challenges from higher costs associated with the pilot shortages.

Didi shares surge after report that regulators are ending probes