HomeUSAStarbucks is set to close these 16 U.S. stores over safety concerns
USA

Starbucks is set to close these 16 U.S. stores over safety concerns 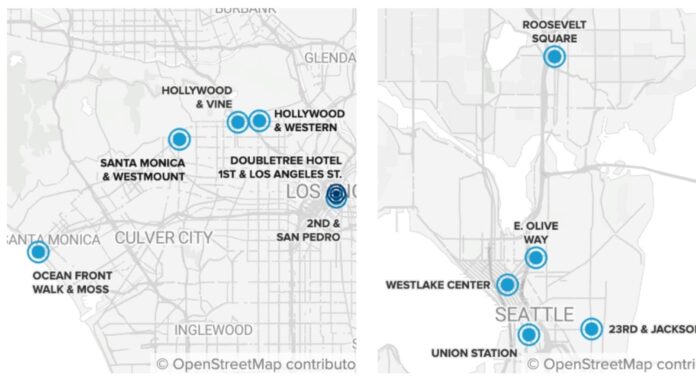 Starbucks will close 16 U.S. stores, mostly on the West Coast, by the end of July because of safety concerns, according to the company. Most of the stores set to close are in the Los Angeles and Seattle metro areas.

“We’ve had to make the difficult decision to close some locations that have a particularly high volume of challenging incidents that make it unsafe for us to operate,” a Starbucks spokesperson told CNBC.

The map below shows the six stores in California and the six in Washington State that will close. The coffee chain will also close two stores in Portland, Oregon, one store in Philadelphia and another in Washington, D.C., also for safety.

Concern about store safety was central to a letter to employees published on Monday from Debbie Stroud and Denise Nelson, two senior vice presidents of U.S. operations at the coffee chain. The letter cites several societal safety concerns, including increased violence and drug use in the area of the stores.

“We know these challenges can, at times, play out within our stores too. We read every incident report you file — it’s a lot,” the letter said. “Simply put, we cannot serve as partners if we don’t first feel safe at work.”

The closures come at a unique time for Starbucks as more stores vote to unionize: over 100 of the company’s 9,000 U.S. stores since workers at a store in Buffalo, New York, became the first to join a union at the end of 2021.

One of the 16 stores being shuttered, 505 Union Station in Seattle, had also voted to join Starbucks Workers United — a fact that the union tweeted about after the announcement.

Property crimes up across Seattle and Los Angeles

Starbucks’ letter to employees about safety did not mention unions, and focused solely on safety concerns. Starbucks officials have said, however, that the closures are about matters of safety .

And crime data from Seattle and Los Angeles seems to the back up those concerns. In Seattle, property crimes, which include car theft, larceny theft and burglary, and violent robberies are up nearly 20% for the first five months 2022 from the year-earlier period, according to the Seattle Police Department.

In Los Angeles, those types of crimes are up citywide more than 14% for the first six months of 2022 compared to the same period last year, according to the Los Angeles Police Department.

In West Hollywood, however, those figures are much higher: Property crimes and violent robberies have more than doubled in 2022 from 2021, according to the LA County Sheriff.

Read the full list of stores that Starbucks will close below:

Consumer confidence is near its lowest in a decade, and that could be a problem for Biden

Banks’ boost from rising interest rates is waning because of this one issue, Morgan Stanley says