HomeUSASteve Bannon thought he was 'above the law,' prosecutors say in contempt...
USA

Steve Bannon thought he was ‘above the law,’ prosecutors say in contempt trial 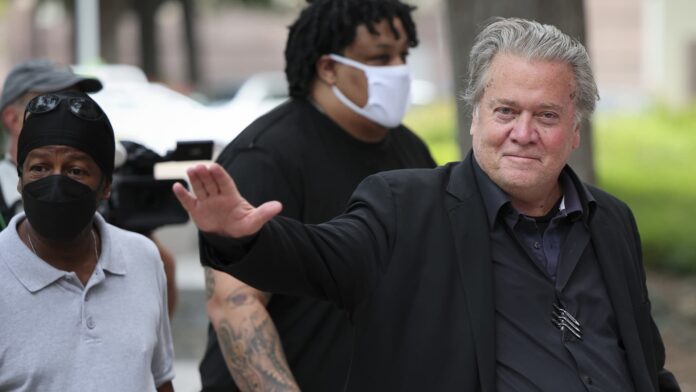 Former White House Chief Strategist Steve Bannon arrives at the U.S. District Courthouse for his trial for contempt of Congress, on July 19, 2022 in Washington, DC.

WASHINGTON — Former Donald Trump chief strategist Steve Bannon “decided he was above the law” when he blew off the House select committee investigating the Jan. 6 attack, a federal prosecutor told jurors Tuesday in opening statements of Bannon’s contempt of Congress trial.

Bannon “chose to show his contempt for Congresses’ authority and its processes” by refusing to comply with a subpoena, Assistant U.S. Attorney Amanda Rose Vaughn told jurors.

“It wasn’t optional, it wasn’t a request and it wasn’t an invitation. It was mandatory,” Vaughn said.

But Bannon lawyer Evan Corcoran told jurors they should question whether the evidence they’ll be presented with during the trial was “affected by politics” and declared that Bannon was “innocent of the charges.” He suggested that the dates of the two subpoenas delivered to Bannon last September — one for documents, the other for testimony — were subject to negotiation.

“The dates on the subpoena were not fixed,” Corcoran said. “They were flexible.”

Bannon’s case boils down to whether Bannon’s defiance of the subpoenas was purposeful. The government argued that Bannon was “thumbing his nose at the orderly process” of the government.

“He didn’t get stuck on a broken-down Metro car,” Vaughn said. “He just decided not to follow the rules.”

The jury of 12 and two alternates, the majority of whom are nonwhite, were seated from a pool of 22 jurors who were qualified. The jury selection process ran long on Monday, as many potential jurors voiced their dislike of Bannon and his work in the Trump White House. Those who did so were eliminated and were not on the final panel.

Corcoran noted Tuesday that Bannon worked for the White House, but was vague about his work for Breitbart News, describing it as a “successful media company that provided news and commentary across the country” but not referring to it by name.

While avoiding specifics about the issue of Trump’s purported claim of executive privilege, Vaughn noted that Bannon had an unspecified claim of an exemption from cooperating that was deemed not valid by the committee.

“It’s up to the committee,” Vaughn said. “The committee told him that his privilege did not excuse him from complying.”

Bannon only has a narrow argument to make in his defense due to rulings from the Trump-appointed judge overseeing the case.

Among the only defenses he can deploy, U.S. District Court Judge Carl Nichols ruled, is to offer evidence to the jury that he believed he was engaged in ongoing negotiations with the House select committee investigating the Jan. 6 attack, and that the dates on his subpoenas requiring him to provide documents and testimony to the committee in October 2021 were “malleable.”

Testimony is set to begin in the trial on Tuesday and pick up again on Wednesday morning.

EU makes USB-C mandatory for Apple iPhones and other devices

The consumer discretionary sector is outperforming this quarter. Here are analysts’ favorite names

How ETF investors can pull through a bear market