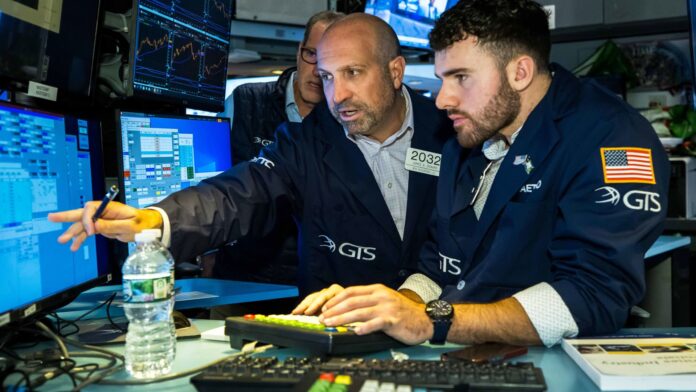 With a 1% excise tax on share buybacks looming on the horizon, corporate America may start making some changes to how it returns money to investors. The new levy is part of the Inflation Reduction Act and goes into effect in 2023. Compared to a provision in the IRA that would tack on a 15% corporate minimum tax , the stock buyback measure is less of a big deal, said Katie Nixon, chief investment officer at Northern Trust Wealth Management. “It may, on the margin, shift the balance that has kind of shifted away from dividend payments to buybacks as a main driver of value,” she said. Companies that have been big on buybacks include tech giants Apple , Alphabet and Meta . “They may shift their focus toward dividends and dividend increases,” Nixon said. Just last week, General Motors announced it was reinstating its dividend in September, which was suspended in 2020, although it had been mulling the move for some time. The automaker also will resume and increase its opportunistic share repurchases. In fact, the 1% tax on share repurchases could boost corporate dividend payouts by 1.5%, according to an estimate by the Tax Policy Center . UBS also sees an incremental increase in dividend growth due to the tax change. “Accretion/dilution analysis suggests that a 1% tax should not matter much for a firm’s decision to buy back stock unless P/Es are fairly high,” UBS analyst Keith Parker wrote in a note Wednesday. “But taxes can often influence corporate-payout decisions as seen by the continuous fall in dividend payout ratios until the early 2000s when tax rates were higher for dividends than cap gains,” he said. Deutsche Bank analyst Nicole DeBlase wrote in a note earlier this week that the levy “looks very small and at most is -1% EPS headwind for a few companies.” She cited specialty truck builder Oshkosh and climate control company Lennox International as among those that could be affected. “That said, we do see the potential for this to create some shifts in capital-allocation priorities — perhaps with a bias towards more organic reinvestment, M & A and/or dividends,” she added. While the tax may not make much of a difference in the short term, over the long term the tax will probably ramp up, said David Wagner, equity analyst and portfolio manager at Aptus Capital Advisors. “We could see more companies putting an emphasis on both regular and special dividends,” he predicted. Weighing tax treatments The IRA won’t be the only factor at work as companies decide whether to speed up their buybacks before the end of 2022 or to push out a dividend. For instance, there’s the tax treatment shareholders face when they get back capital. With buybacks, investors don’t incur additional taxes on the buyback itself — not until shares are sold. Meanwhile, dividends are subject to double taxation: first at the corporate level and again as shareholders receive the payments. Qualified dividends are taxed at 0%, 15% or 20%, depending on investors’ income level and tax-filing status. “It’s probably not going to change CFOs’ perspectives on buybacks, but it may pull forward some buyback plans into 2022, since it happens in 2023,” said Nixon of Northern Trust. Stock picks In this environment, Wagner likes dividend-paying names and small-cap stocks. Small caps tend to trade at 4% premium to large caps over a longer period of time and are trading at a 25% discount to large caps, he said. They are also the only major asset class to outperform inflation in every decade since 1930, Wagner noted. When picking stocks, he looks for those that are growing dividends at a double-digit rate, have strong free cash flow and solid revenue growth. They also have some sort of pricing elasticity, a competitive advantage and an avenue for growth especially in inflationary times. Here are some names on his list: Carlisle , which manufactures construction materials and weather-proofing technologies, is boosting its quarterly dividend by 39% — the largest the company has done in the past 25 years, its CEO said. On Sept. 1, the dividend will be 75 cents per share, up from 54 cents. Carlisle has outperformed its entire industry, generating strong free cash flow and maintaining margins in an industry that has substantial inflationary headwinds, Wagner said. Chemed , which operates Roto-Rooter and Vitas Healthcare, recently announced it would increase its quarterly dividend to 38 cents per share on Sept. 2, up from 36 cents per share. Chemed has a resilient business model, particularly on the Roto-Rooter side of the business, Wagner said. That “allows the company to grow revenue in the double digits, grow earnings, buy back shares, and with all of this are able to grow dividends at a double-digit rate,” he added. Valvoline pays a quarterly dividend of 12.5 cents per share. The auto parts and supplier company recently announced it was selling its global products business to Aramco for $2.65 billion. However, Valvoline retained its consumer side of the business, the auto-service locations. “That business continues to be resilient, especially in a recovery economy as people continue to drive at an increased pace as compared to last year,” Wagner said. PulteGroup is Wagner’s contrarian pick. The homebuilder currently has a quarterly dividend of 15 cents per share. Despite negative sentiment among the builders and the declaration of a “housing recession ” by the National Association of Home Builders, Wagner said there is still robust demand given the structural underdevelopment in the U.S. home ecosystem over the past decade. He believes in the company’s valuation at current levels and thinks it will be able to maintain margins in a declining demand environment. — CNBC’s Michael Bloom contributed to this report.

Cathie Wood still believes deflation is on the horizon, says the Fed is making a mistake