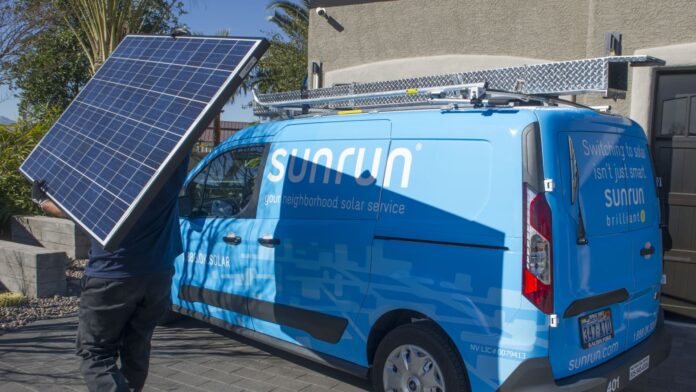 Shares of residential solar installer company Sunrun could surge about 45% from here should an ambitious spending package pass, according to Barclays. Solar stocks got a boost last week following an announcement that Senate Majority Leader Chuck Schumer, D-N.Y., and Sen. Joe Manchin, D-W.V., reached a deal on the “Inflation Reduction Act of 2022.” The legislation includes $369 billion for climate and clean energy provisions. Analyst Christine Cho initiated coverage of Sunrun with an overweight rating, saying that the solar energy company would get the most benefit from the bill. “We think the residential installer names are the most directly impacted by the ITC extension, if passed, and prefer RUN and NOVA as ways to invest in the residential solar space given their stable and steady stream cash flows, their growth potential, and their positioning to raise rates charged to customers against a rising interest rate environment,” Cho wrote in a Thursday note. Sunrun has a price target of $46, implying roughly 45% upside from Thursday’s closing price of $31.82. Shares of Sunrun popped 4% in Friday premarket trading. The credits and subsidies in the bill point to a “path of continued investment” over the next decade that would be a boon to solar companies. In recent months, the renewables industry has dealt with supply chain challenges and rising commodities costs that have hindered companies such as Sunrun. “While improvements are still needed in battery technology to counter the intermittency issues inherent in renewables, we think the potential tax credit proposed for storage should kick off a long subsidized growth cycle, which should drive down costs and increase adoption,” Cho wrote. Other overweight-rated names include Sunnova Energy and Array Technologies. —CNBC’s Michael Bloom contributed to this report.