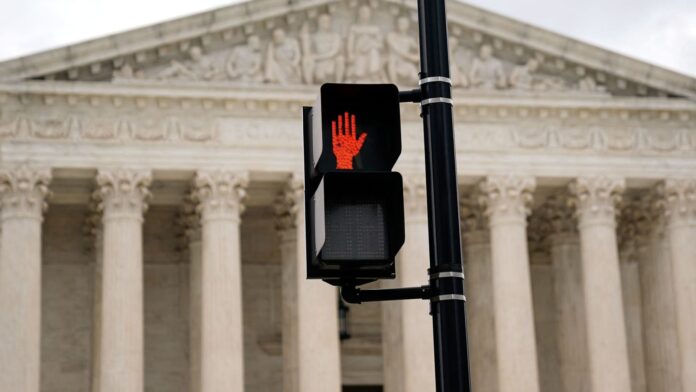 A crosswalk signal is seen outside the U.S. Supreme Court building in Washington, June 27, 2022.

The Supreme Court on Thursday said it will consider a case that could give state legislatures free rein in setting rules for federal elections, without state judicial oversight.

If the Supreme Court rules for North Carolina Republican plaintiffs in the case, it would give state legislatures, not state courts, the final word on regulations set by the legislatures for elections of members of the Senate and House of Representatives.

That would be a dramatic change from the current situation, where state courts keep a check on changes in election rules to be sure they don’t run afoul of state constitutions.

And it would be in line with what supporters of former President Donald Trump argued during the 2020 election when they opposed modifications in election rules imposed by state courts in light of the coronavirus pandemic.

Justice Samuel Alito in March wrote, “This case presents an exceptionally important and recurring question of constitutional law” and “There can be no doubt that this question is of great national importance.”

Rick Hasen, an election law expert at the University of California at Irvine, told NBC News, “If the Supreme Court ruled for the plaintiffs, it “would radically alter the power of state courts to rein in state legislatures that violate voting rights in federal elections.”

“It could essentially neuter the ability of state courts to protect voters under provisions of state constitutions against infringement of their rights,” Hasen said.

The case known as Moore v. Harper will be heard in October when the court begins its 2022 term.

It relates to a dispute over the drawing of lines for U.S. congressional districts in North Carolina by the state legislature. North Carolina’s Supreme Court rejected the design of the districts on the grounds they were gerrymandered to favor Republicans.

But the Republican plaintiffs, who are seeking to have the district designs adopted, are challenging that ruling at the U.S. Supreme Court under what is known as the “independent state legislature doctrine.”

That theory, which is based on an interpretation of the Elections Clause in the U.S. Constitution, holds that state legislatures have the sole authority to set rules for federal elections and that those decisions are not subject to review by a state court.

In March, the Supreme Court rejected a request on an emergency basis by the plaintiffs to allow the district maps as originally designed by the North Carolina legislature to be used in the upcoming congressional elections.

But three conservative justices said they would have allowed a stay of the state Supreme Court’s order blocking the districts: Alito, Clarence Thomas and Neil Gorsuch.

Alito, in his written dissent to the decision in March, said, “This case presented a good opportunity to consider the issue” of the extent of a state court’s authority to reject election rules passed by a legislature for federal elections.

“We will have to resolve this question sooner or later, and the sooner we do so, the better,” Alito wrote in his dissent.

Atlantic Equities downgrades Nasdaq exchange, says gains will be harder to come by