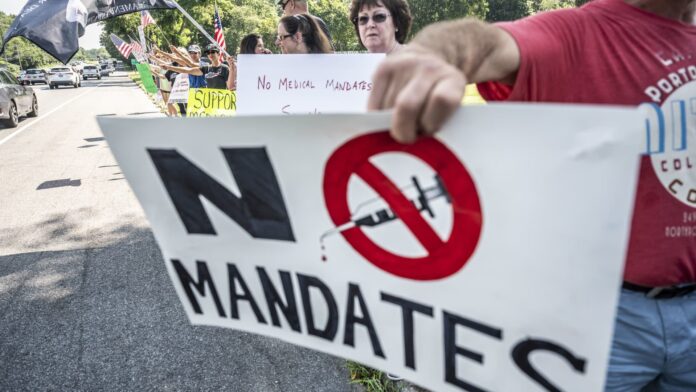 Health care workers protest against being forced to get the Covid-19 vaccine on August 27, 2021, outside the New York State Office Building in Hauppauge, New York.

The Supreme Court declined Thursday to take up a legal challenge brought by health care workers in New York who oppose the state’s vaccine mandate on religious grounds.

Justices Clarence Thomas, Samuel Alito, and Neil Gorsuch said the court should have taken the case.

When the requirement was first imposed last August as a way to help prevent the spread of the latest Covid variant, it allowed exceptions based on medical reasons or religious objections. But the religious exemption was later removed.

Gov. Kathy Hochul, who is Roman Catholic, said she was not aware of any “sanctioned religious objection from any organized religion” and that religious leaders including the Pope were encouraging people to get vaccinated.

Sixteen health care workers sued, saying they had religious objections because fetal cell lines were involved in the testing, development, or production of Covid vaccines. They said the mandate violated their religious freedom because it allowed others who were unvaccinated to continue working.

But lawyers for the state said the Covid mandate was similar to longstanding rules requiring health care workers to be vaccinated against measles and rubella. Those requirements, too, allow exemptions only for medical reasons. Laboratory-grown stem cells, which derive from cells collected from a fetus nearly 50 years ago, were also used for testing the rubella vaccine, the state said.

“The presence of a single, limited medical exemption to a vaccine requirement does not require the State to provide a blanket religious exemption from vaccination,” they said in their written submissions.

Writing for the three dissenters, Thomas said confusion remains about a mandate like New York’s that provides no religious exemption. He said the court should have taken the case now to head off similar confusion in the future.

Last December, the Supreme Court declined to temporarily block the vaccine requirement in the case. Justices Clarence Thomas, Samuel Alito and Neil Gorsuch said then that the court should have granted the request to put the mandate on hold.

Since last fall, the court has declined to block other vaccine mandates that don’t provide for religious exemptions, applying to New York teachers, Navy sailors, health care workers in Maine and Massachusetts, and college students in Indiana.

Apple will take years to diversify from China factories: Counterpoint