Tech companies urge U.S. to let the kids of visa holders stay past 21 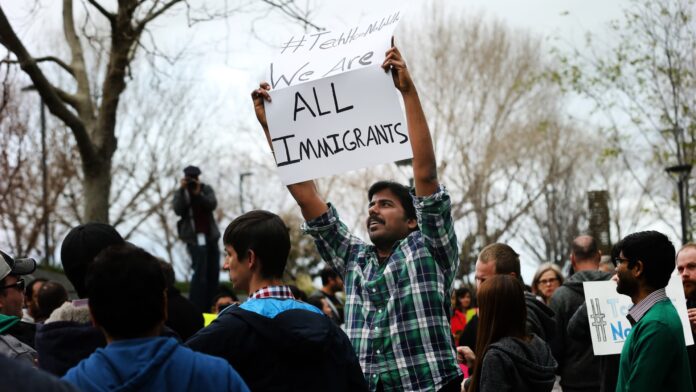 Muthumalla Dhandapani, an Indian immigrant with an H1-B visa and a Comcast employee in Sunnyvale, protests President Trump’s immigration orders in 2017.

A coalition of tech companies including Amazon, Google, Salesforce and Uber are urging the Department of Homeland Security to revise policies for children of high-skilled visa holders, many of whom work for their businesses, so they can stay past the age of 21 without a green card.

In a letter to DHS Sec. Alejandro Mayorkas made public on Tuesday, the companies asked that the Biden administration “establish more robust aging out policies.” They point to the more than 200,000 children who have grown up in the U.S. while their parents held visas, including the high-skilled H1-B visa that’s particularly common in the tech industry. Once those children turn 21, they must apply for a green card, a process that can drag on and even force some to leave in the interim.

These companies are also encouraging Congress to pass the bipartisan America’s Children Act to create a pathway to citizenship for so-called ‘documented Dreamers’ in this situation.

“Policymakers have recognized the plight of the Dreamers – children brought to the U.S. by their parents, who know no other country and were left without legal status – and have provided interim relief through the DACA program,” the group wrote. “Now, we urge policymakers to also address the needs of the more than 200,000 children of high-skilled immigrants who risk falling through the cracks of the immigration system.”

The tech industry has long championed immigration issues, but this time they also highlight the pressing needs of employers at a time of widespread labor shortages in the U.S.

“Earlier this spring, American companies had more than 11 million open jobs – 5 million more openings than workers,” the coalition wrote. “Many of these job vacancies are for highly-skilled positions, and U.S. companies recruit foreign-born workers to fill in the worker shortages. These openings are especially critical given the pandemic as the U.S. seeks to maintain its world leader status in innovation and ingenuity.”

The companies argue the current aging-out policies hurt their ability to recruit high-skilled workers from outside the U.S.

Once they turn 21, children of these visa holders “face the difficult choice between leaving the country that has become their home, or attempting to re-enter the labyrinthine, high-stakes immigration system for a different visa where options are extremely limited. Their parents must either become separated from their children or abandon their careers and any plans to seek permanent residence in the U.S,” the group wrote.

“Those who are forced to leave are a loss to America’s communities and workforce,” the companies wrote.
“Their skills and talent will go to our global competitors.”