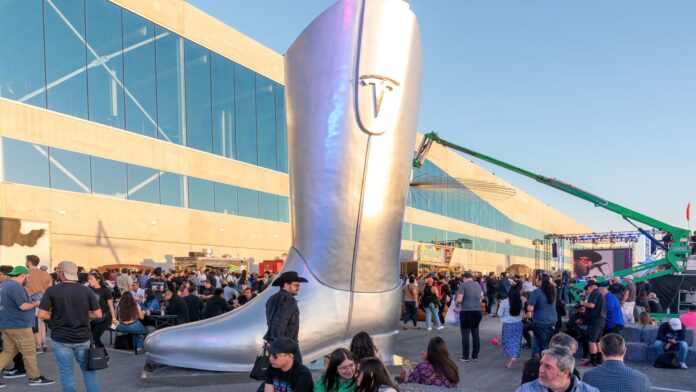 A giant cowboy boot is on display outside the Tesla Giga Texas manufacturing facility during the “Cyber Rodeo” grand opening party on April 7, 2022 in Austin, Texas.

Tesla just posted its second-quarter vehicle production and delivery numbers for 2022. Here are the key numbers:

Delivery numbers, which are the closest approximation of sales reported by Tesla, fell just shy of analysts’ expectations.

According to a consensus compiled by FactSet-owned Street Account, analysts were expecting deliveries of 256,520 vehicles for the quarter, which was marked by Covid restrictions, supply chain snarls, semiconductor chip and other parts shortages.

The company has soft-guided to around 50% average annual growth, long-term, depending on manufacturing capacity and other factors.

In Tesla’s first-quarter shareholder deck, the company said, “We plan to grow our manufacturing capacity as quickly as possible. Over a multi-year horizon, we expect to achieve 50% average annual growth in vehicle deliveries.”

In China this quarter, Tesla had to shut down or only allow partial operations at its Shanghai factory for weeks due to covid-related public health orders. (FactSet noted that some analysts’ projections were excluded from the StreetAccount consensus if they did not take into account the Shanghai factory shutdown.)

Other supply chain snarls, worsened by Russia’s brutal invasion of Ukraine, also impacted Tesla and the broader auto industry during the quarter.

Separately, Tesla is grappling with the high costs of building out and starting up production at new factories in Austin, Texas and near Berlin in addition to its Fremont, California and Shanghai plants. CEO Elon Musk has publicly lamented that the new factories are costing Tesla billions, but have not yet been able to make enough vehicles and batteries to justify their costs.

As startups and legacy automakers offer more new electric vehicles, Tesla’s share of the global and domestic EV market is expected to decrease but remain substantial.

Some big investors called the Fed-led market mayhem. Here’s where they are hiding out