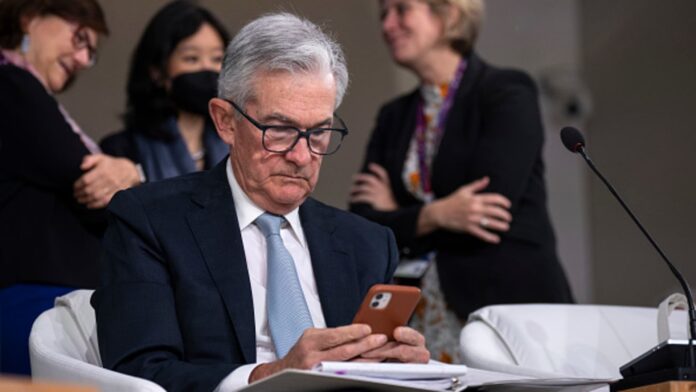 As markets look for signs that the Federal Reserve is stepping away from its breakneck pace of interest rate hikes, two words from this week’s meeting could be crucial. Investors will be looking to see whether the central bank plans to take a “step down” from its monetary policy path, an expression used recently by San Francisco Fed President Mary Daly and adopted multiple times in Wall Street market and economic commentary. No one is expecting the Fed to stop rate hikes, at least for several months. But news that this week could be the end of a string of three-quarter point increases at least would provide some balm for weary financial markets. Investors have been hoping for a Fed “pivot” on policy, but likely will take anything they can get at this point, even if it just means a nod to a potential half-point hike in December. “While it is hard to call hikes of 75 [basis points] and 50 [basis points] a ‘pivot,’ we think some may try to claim victory, but even here there is difficulty,” Walls Fargo economists wrote in a recent client note. “For this to occur, the Fed would need to signal a near-term ‘step-down.'” A basis point is one one-hundredth of one percentage point. Thus far this year, the Fed has r aised its benchmark short-term borrowing rate 3 percentage points, or 300 basis points. Uncertainty ahead Markets have almost completely priced in the 75 basis point move for November, but are split on December between 50 and 75, according to CME Group data. The expectation from there is for a pronounced slowdown, so Wall Street will be watching carefully Wednesday for language in the post-Federal Open Market Committee meeting statement, as well as Chairman Jerome Powell ‘s news conference thereafter. “We expect the FOMC to deliver a fourth 75bp rate hike at its November meeting, and indicate that it could soon be appropriate to step down the pace of hikes,” Morgan Stanley chief U.S. economist Ellen Zentner wrote. “We continue to expect the Fed to step down to 50bp in December and 25bp in January, reaching a peak rate of 4.625%.” What the “step down” language will mean, however, is unclear. Federal Reserve officials are watching the economic data closely, and some of it is not cooperating with the central bank’s quest to return inflation to 2%. Consumer price index and personal consumption expenditures releases show inflation still near 40-year highs. The labor market remains extraordinarily tight, evidenced by a release Wednesday showing job openings still outnumber available labor by a nearly 2-to-1 margin. Some economists think the Fed will be leery about tipping its hand for future rate moves. If the data continue to show a vibrant labor market and high prices, officials will want the option of continuing down the present path. Even Daly, the San Francisco regional president who talked extensively about the “step-down” concept, said she hasn’t changed her views about where rates need to go over the long run, only that she’d like to see the intensity of the increases lessened. “For me, it’s really challenging to step down right now when we have inflation printing so high and we have core services inflation rising and we also have the unemployment rate at historical lows,” Daly said in a public appearance a few weeks ago. “I make the distinction between when you start talking about it vs. when you start doing it. I think the time is now to start talking about stepping down.” Wall Street expects those to be baby steps down. “We expect the Fed to remain data dependent and emphasize cumulative policy rate tightening over any step down in pace,” Bank of America said in a client note. “The November FOMC meeting is not about the November policy rate decision. Instead, the meeting is about future policy rate guidance and what to expect in December and beyond.” The bank’s experts said it expects Powell to be cautious. Possible letdown Markets already have misinterpreted the chair’s comments in the past — over the summer, a seemingly innocuous comment from Powell that he expects a day to come when the pace of hikes would diminish set off a feverish rally on Wall Street that was the exact opposite of what the Fed wants as it looks to tighten financial conditions. “We think the Fed will be reluctant to pre-commit to a smaller rate hike this far in advance. Data still need to cooperate,” BofA said. “Committee members may also be reluctant to signal a slower pace of hikes lest financial markets interpret the decision as a ‘dovish pivot.'” On balance, the bank said, investors may be somewhat disappointed as Powell remains noncommittal as “appropriate policy is now ultimately about the final destination and not the journey.” Even with the step-down hopes from Wednesday’s meeting, market expectations are still for a fairly aggressive Fed. Futures pricing points to a “terminal rate,” or the point where the Fed stops, at just shy of 5%, or 2 percentage points above the current funds rate level. Fed officials have been steadfast that they plan on holding rates higher, even if it means higher unemployment and a slow-growth economy. “I’m not sure how much the Fed is going to tip their hand to show how much they’re going to do in December,” said Chris Zaccarelli, chief investment officer at Independent Advisor Alliance. “The market’s going to be surprised when the Fed causes a recession and doesn’t immediately cut rates.”

Palihapitiya blames the Fed for ‘perverted’ market that benefited him

These could be the next hot food and drink trends