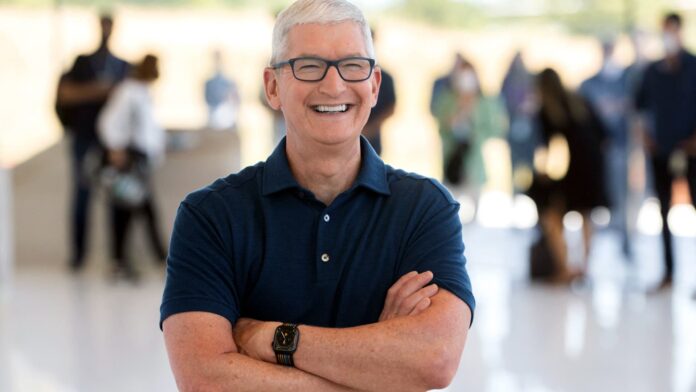 Apple CEO Tim Cook poses for a portrait next to a line of new MacBook Airs as he enters the Steve Jobs Theater during the Apple Worldwide Developers Conference (WWDC) at the Apple Park campus in Cupertino, California on June 6, 2022 .

Cook was asked in a recent interview with China Daily USA what he thinks the key factors are for augmented reality, or AR, to succeed in the consumer market.

“I am incredibly excited about AR as you might know. And the critical thing to any technology, including AR, is putting humanity at the center of it,” he said, echoing comments he’s made in the past about how important AR is to the company.

He then described Apple’s work in the space so far, which has been focused on AR apps on the iPhone and iPad, before adding, “But I think we’re still in the very early innings of how this technology will evolve. I couldn’t be more excited about the opportunities we’ve seen in this space, and sort of stay tuned and you’ll see what we have to offer.”

It’s one of the clearest examples yet of Cook acknowledging that Apple has something bigger in the works. While the current apps can be useful for things such as mapping a room or seeing if a new piece of furniture might fit, it seems more likely that Apple has been building the library and tools for developers to build apps for something like a headset.

Bloomberg said in May that Apple recently showed its AR/VR headset to the Apple board and that the company plans to announce it as early as the end of this year, although it could slip into next year. The same report said Apple plans to sell the headset in 2023.

Apple would be playing catch-up with a number of other big tech companies, particularly Meta, which changed its name from Facebook last year to signify its revamped focus on immersing users in virtual worlds known as the “metaverse,” and Microsoft, which first introduced its Hololens AR glasses in 2016.

Trump had a direct role in plan to install fake electors

Buy now, pay later loans make it tough to get a handle on your credit