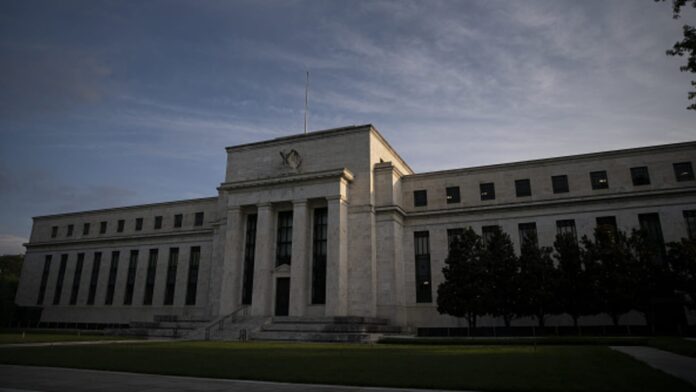 A round of tough talk from Federal Reserve officials is convincing prominent Wall Street economists that interest rates are going up three-quarters of a point this month. In separate notes released Wednesday and Thursday, Goldman Sachs, Bank of America and Nomura all raised their expectations for the September meeting of the Federal Open Market Committee. They see policymakers now moving to a 0.75 percentage point increase, as opposed to earlier expectations for a 0.5 percentage point move. That switch follows comments from both Fed Chair Jerome Powell and Vice Chair Lael Brainard, both of whom said the central bank is in the inflation fight for the long haul and will keep hiking rates until they see more progress that prices are under control. Financial markets in turn have priced in the higher move , with futures contracts pointing to an 86% probability as of Thursday afternoon, according to the CME Group. “We still think that Fed officials hope to bring inflation down without a recession and are open to doing this over an extended period if necessary,” Goldman economists David Mericle and Jan Hatzius wrote. “But they appear to want to see more consistent evidence that every aspect of this process is on track and proceeding fairly quickly, and they appear less anxious for now about accidentally overtightening in light of the strength of the labor market.” Powell told the Cato Institute on Thursday that he is “strongly committed” to fight inflation and pledged “we will keep at it until the job is done.” That came one day after Brainard similarly vowed that “we are in this for as long as it takes.” Though neither official slotted themselves into a particular rate hike at the Sept. 20-21 FOMC meeting, markets took it to mean that the higher option was more likely. A Wall Street Journal article Wednesday morning added to the market’s conviction for a more hawkish Fed. “Comments from FOMC participants over recent weeks suggest a greater urgency to raise rates somewhat more rapidly and to a higher overall level in order to more forcefully address persistently above-target inflation,” Nomura economist Aichi Amemiya and others wrote. “Trend inflation pressures remain too high, and the Fed appears committed to restoring price stability at all costs, even if it results in a recession, underscored by Chair Powell’s speech at Jackson Hole,” they added. Bank of America left some wiggle room for the Fed to move back down to a half-point increase, saying it “may still be a game-time decision.” However, the bank’s economists changed their forecast to a 0.75 point move, and said they now expect the increases to continue until the fed funds rate exceeds 4%, from its current 2.25%-2.5% range. Economist Michael Gapen wrote the central bank could be influenced by next week’s release of the August consumer price index report. If it shows another small month-over-month gain, that could sway the Fed into a less aggressive stance. “That said, we think that the outlook has shifted in the direction of another large rate hike in September, and we adjust our views accordingly,” he said.

Treasury yields in focus ahead of Fed meeting